Posted on November 6, 2011 by davidsberry

…as they’re cabbage-lookin’. Yet another of my gran’s pithy observations nails the whole series of naysayers who have tripped over their faces this week to do down Scotland’s future as a centre of renewable energy excellence. It is suspicious that an unholy alliance of unlikely bedfellows including Citicorp and David Cameron. As the Institution of Mechanical Engineers piece in the Hootsmon was trashing our future, one Iain Gray seemed to have had amazing foresight to have penned and submitted an op ed piece just in time to share the same issue. Funny, that.

There is another side to that argument. But, in the spirit of debate, let’s take their doubts seriously and examine whether, firstly, Scotland is sensible to invest heavily in renewables as a technology to boost its commercial future and, secondly, whether the goal of providing for 50% of our energy needs by 2020 is realistic. After all, even the bubbliest cheerleader for renewables admits that the wind doesn’t blow every day and we’re some ways off mass exploitation of some of Scotland’s renewable resources, such as wave and tidal. First off, where do we stand just now, as regards power generation?

This picture is skewed because the late noughties were bad for our nuclear stations, both of which were shut down for periods with engineering problems. But, nonetheless, this did not strain the supply for two reasons: 1) renewables, especially wind farms were coming on-line and 2) A large amount of energy gets sold in England because Scotland runs a surplus—recently around 16TWh or 1,830 Mwatts over the year. Sources of our generating capacity up to 2004 are given below:

Table 1—Source of Scotland's Power Generation up to 2004 (Source: Wikipedia)

Though total theoretical capacity adds up to almost 10,000 Mw, this must be qualified. As mentioned allowance must be given for fickle winds and the limited water storage of most hydro schemes if they are run flat out. Therefore, taking only 25% of wind farm and 20% of Hydro capacity as sustainable at all time, this still gives a figure over 8,000 Mw or 60% over what Scotland has typically needed to be generated.

Looking in more detail, power demands vary on a daily cycle, with the peak coming during the working day and the trough in the wee hours. Practice has therefore been to run both nuclear stations as ‘base load’ of around 2,500 Mw, which satisfies overnight demand and even allows for pumped storage facilities like Cruachan to be recharged. This is augmented, when required, by one the three large fossil fuel stations.

In recent times, capacity has been significantly augmented by a large number of wind farms coming on-stream in the late noughties, which added a further theoretical 1,478Mwh of capacity but, effectively, a constant output more like 375MWh. These are listed in Table 2 below:

The last couple of years have seen further acceleration in the provision of renewable wind capacity, along with an extension to the hydro sector and the first of the major offshore wind projects. These are listed in Table 3 below and represent another 1,231 MWh of capacity or the ability to sustain a constant 308 MWh of further demand.

Looking out over the next couple of decades, not all of the stations will remain in operation. In fact, both Hunterston and Cockenzie are scheduled for closure by 2014. This means that some means must be found of replacing roughly 2,500Mw of capacity, roughly half of which needs to run constantly as part of the baseload. Given that an average steady 1,830 MWh is regularly supplied to England and Northern Ireland, much of the shortfall could be found there. Taken together with the 2,709 MWh added by renewables as shown above and the fact that Scotland coped with partial shutdowns of both nuclear baseline suppliers, supply should be adequate to cover the loss of both Hunterston “B” and Cockenzie. If, however, Cockenzie did get Iberdrola’s extension of life through conversion to gas firing, that would remove any uncertainty. A projection of Scotland’s future supply sources is shown below: 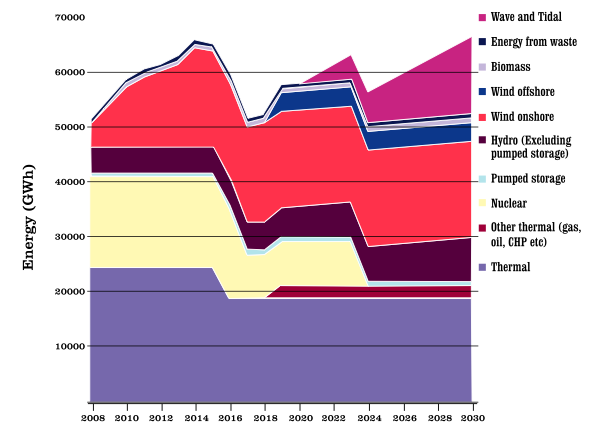 The diagram shows the continued rise in renewables 2008-14 that will allow both Hunterston and Cockenzie to be taken off-stream at the end of that period. The supply simply dips back to the base demand level with which Scotland has coped for the last decade. From that point on, other renewables are expected to kick in, starting with the huge 1 GWh offshore farms planned for the Moray Firth and off the Firth of Forth. This will then be followed by wave energy, based on the Pelamis project current running off Orkney and tidal systems based on those being experimented with in the Sound of Islay and the Pentland Firth. Their maturity will allow Torness to be decommissioned.

Scotland’s natural resource base for renewables is extraordinary by European, and even global standards. Our estimated potential: 36.5 GW of wind, 7.5 GW of tidal power, and up to 14 GW of wave power potential—most of Europe’s total capacity. The renewable electricity generating limit could be as large as 60 GW, some six times greater than the existing capacity from all Scottish fuel sources.

You disagree with this? Do your sums then use the Comment option below.