Those Who Don’t Learn from History…

Posted on November 3, 2011 by davidsberry

…are doomed to repeat it.” (Burke) It can be hard to discern key turning points in history as they happen, especially when centuries of tradition and inertia colour viewpoints. But we are coming up to the 70th anniversary of what can be seen, in retrospect, to have been the end of the British Empire. I leave the reader to interpret this as a metaphor but would welcome any comments they may have on that.

In November 1941, Britain still represented a real world power; within 90 days, the most humiliating surrender British forces ever suffered would define its eclipse. Although Malaya and Singapore were recovered from the Japanese, they would seize independence within a dozen years, despite intense anti-guerrilla campaigns fought in the 1950’s. The balance of the pink-painted empire was soon to follow.

At this remove, only senior citizens are likely to remember the pride and awe once accorded the British Empire, not only from its subjects. It was the largest and most successful global venture the world had seen and bestrode that globe by virtue of a naval dominance that was seen to reach its apogee in the Fortress of Singapore.

This consisted of a major naval base, twelve coastal batteries (guns from 6” and 15”), four airfields and supporting military bases. Built in the 1930’s, it was actually an expression of British weakness. Unable to afford battle fleets to dominate both Atlantic and Pacific, Singapore was chosen as the strategic crossroads of south-east Asia at which to base a fleet to be sent out from Britain, should need arise.

Within three years of the fortress’ completion in 1938, the need arose. Japan struck the Philippines and Malaya in co-ordination with their December 7th strike on Pearl Harbour. Since war had been looming, the British had reinforced the garrison, which was now 88,600 strong—three divisions, a dozen RAF squadrons—but no fleet. From Lt. General Percival, GOC Malaya Command, right down to the lowliest erk, the spirit of the defenders was high, verging on the cocky. Lt Col. Stewart, CO 2nd Bn. Argyll & Sutherland Highlanders asked Percival “Don’t you think our men are worthy of a better enemy than the Japanese?”

When the Japanese seized French Indochina in September 1941, all that the Admiralty could spare as the ‘fleet’ to provide teeth to the fortress was ‘Force Z’: the split-new battleship Prince of Wales and a lighter, faster battle cruiser Repulse. They arrived just as war broke out in the Pacific.

Underestimation of the enemy was rife and heavily racist. Japanese were regarded as undersize, short-sighted makers of shoddy goods. Actually, the British were the shoddy specialists. Traditionally a soft ‘cocktail command’, officers (and their wives especially) lived very well, enjoying more parties than manuevers in the tropical heat. Many of the “British” troops were Indian or Malay; even those from Britain were mostly white-kneed conscripts. There were no tanks. The bulk of RAF fighters were Brewster Buffalos declared to be “good enough for Malaya” by Air Marshal Brooke-Popham. whose cheery estimate was 70% of any invading force would be sunk at sea.

They had not yet met Lt. General Yamashita’s 70,000 China veterans in the 25th Army, who invaded the north coast of Malaya, cuffed the defending 9th Indian division aside and would cover the 700 miles to Singapore in 70 days through audacity and a myriad of successful deceptions (including stolen bicycles). But the heaviest shock came early on when Force Z, sent north to intercept and sink Yamashita’s invasion fleet, was itself intercepted by the Japanese 22nd Air Flotilla. Both huge ships were sent to the bottom in a virtuoso display of precision bombing. Aircraft—including the Luftwaffe’s much-vaunted Stuka precision bombers—had never sunk capital ships at sea before.

This blow alone sent shock waves through the garrison, fanned by rumours about how Yamashita’s men were ghosting through the jungle, trouncing every effort to block them. Morale started to waver. But the coup-de-grace came when the Japanese ranged their artillery across the Johore Strait and started pounding Singapore. Only then was it realised that few guns of the coastal batteries could be swiveled to respond, because new hoods protecting them from air attack also restricted their traverse. This greatest but fleetless of fleet bases had left its back door unlocked.

Singapore was both the greatest and hollowest symbol of Western colonial might. Its capitulation on February 15th 1942 shocked the world. When news reached that arch-exponent of empire, Churchill, he later wrote “I put the telephone down. I was thankful to be alone. In all the war I never received a more direct shock.” Carefully fabricated over centuries, the edifice of colonial invincibility was shattered. Though the Americans would hold out in the Philippines for another four months and all Western colonies were restored within five years, the great colonial game was up. 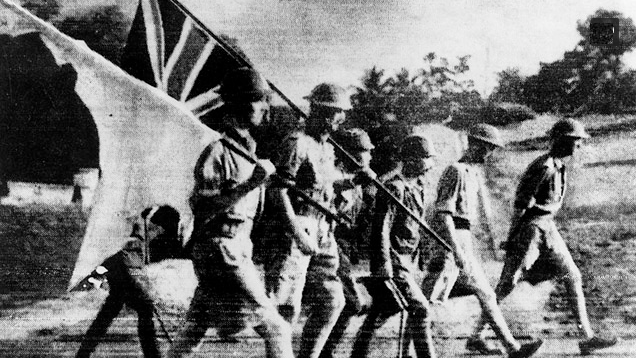 The British surrender party is escorted to Yamashita's Headquarters. Lt-General A E Percival is on the extreme right. (Keystone/Getty Images)

2 Responses to Those Who Don’t Learn from History…