Posted on December 8, 2015 by davidsberry

“Coming events cast their shadows before them“

Coming to the end of ten days in and around San Francisco, I am struck by how much the old place has changed. This 74th anniversary of Pearl Harbor may not be the most propitious occasion to make observations of incursions of the Orient into the Occident. But these major shifts merit comment.

I have loved San Francisco as a city since first introduced to it forty years ago. It has much in common with Edinburgh: its myriad views of hills and sea are photogenic and stunning; it acts as the cultural magnet for an extensive hinterland; it has become a major tourist destination. It also suffers from overshadowing by a larger, equally cosmopolitan rival better placed to take advantage of trade links on offer—New York in their case.

Unlike much of America, San Francisco has always looked to the Orient for its trade. Its cosmopolitan and oriental slant started early when many Chinese were brought in to help build the transcontinental railroads linking in with the rest of the country. But the City was built largely by Europeans, first brought here by the 1849 Gold Rush, boosted by the vast lumber and agricultural resources of California. And when a whole new set of industries from shipbuilding to aeronautics swept West in WW2, it formed the kernel of Silicon Valley and they have never looked back.

Symbol of the Sixties: TransAm Skyscraper Does What it Says on the Tin

By the 1980s, the rising trade clout of Japan and Korea and the aftershocks of the Vietnam war poured new waves of oriental immigrants into the area, leavening the black and chicano elements and these have proved to be among the most successful immigrant groups America has seen, with many using family and hard work to propel first generation into professional careers through diligent ambition and education.

This was the state of play in the mid-1990s when I last lived here—a cosmopolitan City with its feet in the West and its eyes on the East. But in the last decade, a shift is discernible, linked with the inexorable growth of China as a global economic force. There has been no massive influx of people, as there was after Saigon fell or when the railroads were built. But the character of the place is changing rapidly.

Walk through San Francisco College at Balboa Park and there are almost no white faces. Ride BART or the Muni and almost all the faces are Asian or Latino. What was once a blue collar district like Noe Valley, with most working skilled manual jobs in places like Hunter’s Point shipyard, is now threaded with tasteful enterprises and a boatload of rich young whites who hop on the huge smoked-window buses to whisk them off to Google or Facebook in the 21st century’s incarnation of Silicon Valley.

But the real change is in the Financial District downtown. The change in skyscraper construction is mirrored in those occupying them. Whereas once the faces were all white, except for serving staff in the watering holes and restaurants and Chinese faces were generally limited to nearby Chinatown, there is far more of a mix, with Chinatown now embracing what was once Irish and Beat-poet North Beach. Dim sum is now as popular as pastrami sandwiches for lunch.

The Poet Room in City Lights Bookstore: Still There, but for How Long?

The combination of affluence and racial mix is palpable, tasteful upmarket establishments spreading to the once-run-down Embarcadero waterfront (now a palm-tree boulevard of vintage trolley rides), infiltrating the once-sleazy, brothel-infested Tenderloin and spreading into SoMa (South of Market), replacing warehouses so artists can no longer afford studios. 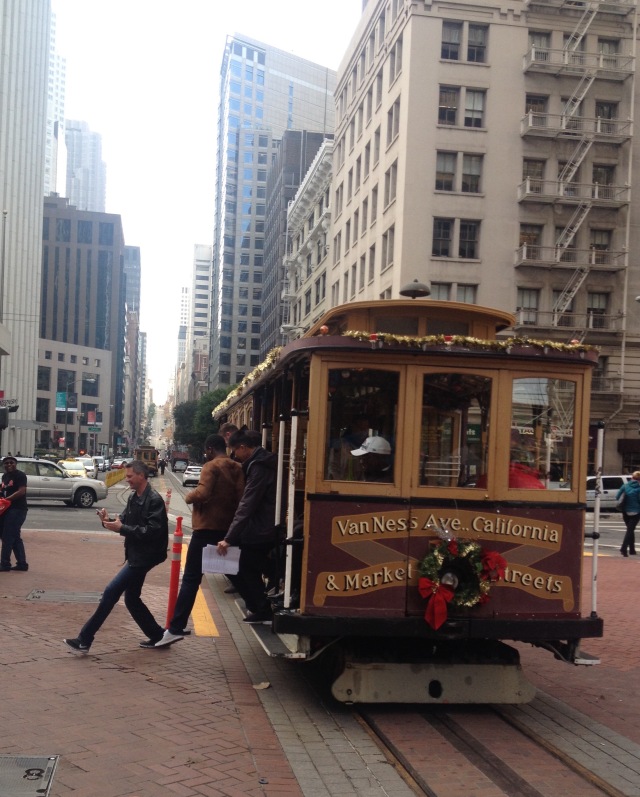 But it’s the type of business in the skyscrapers that is driving all this. Always a financial centre with Bank of America headquartered here, the trend of the last few years is that here is where Chinese money made from booming trade is returning to America in the form of investments. Buying US T-bills is no longer sufficient. Entire US companies are finding their leases terminated as the Chinese enterprise that built/bought their offices wants the space for their own West coast operations within the US.

Although the US Immigration Service is still anally vigilant about people trying to sneak into the country, the State of California and the City and County of San Francisco are no slouches when it comes to seizing business opportunities. These days, San Francisco is giving Hong Kong and Singapore a run for their money as a financial hub and catalyst for trade development.

Lunch at the spectacular Cliff House out on Great Highway (overlooking the rolling Pacific as it sprays surf on the pelicans perched on Bird Rock) is a local treat. There are many ship movements to observe. At least once an hour, a massive container ship appears on the horizon and heads for the Golden Gate to discharge in Oakland’s humming port. Most of the containers are emblazoned “Han Jin“. Shipping traffic in general here makes our Firth of Forth look like a sleepy backwater.

View from the Cliff House. That Dot on the Horizon Is the Future

But also listen to your fellow diners; many are Chinese but they are all speaking Mandarin, not Cantonese—the language of native San Francisco Chinese. Until recently. Most switched-on San Franciscans recognise this fundamental fact and are embracing it. But the impact of China’s development into a global economic power is still barely acknowledged in much of the West.

Even if you don’t live anywhere near San Francisco, but have ambition for your children, I would recommend they consider studying a second language: Mandarin.