Clearing Away the Past

A prominent feature of the East Lothian shoreline and visible all round the Forth, Cockenzie Power Station spanned half a century. Once an embodiment of the proud coal tradition in the West of the county, it followed on immediately from Preston Links mine (closed 1964) to use coal from new local super-mines like Monktonhall.

While still a pupil at NBHS, I felt involved. Our science teacher, Mr Monaghan, was tasked with air quality monitoring to determine how well the 152m chimneys dispersed flue gases. His stuck his inlet pipe out the wall. For two weeks, me and equally evil buddies slipped back at night to burn sulphur beside it, throwing his readings off and his environmental sensibilities into a panic before we broke down and confessed.

Monktonhall never made it past the mid-1980s. Towards the end, Australian coal, shipped round the world and railed over from Hunterston, supplied it. Environmental awareness highlighted its embarassingly clod-hopping carbon footprint. Condemned as our dirtiest power station, it was put on notice of closure.

At first, Iberdrola (masquerading as Scottish Power) wanted it re-engineered to burn natural gas, dispatching arm-twisting minions to achieve this. ELC’s administration of the time (2009) wanted no part of it but the Scottish Government over-ruled them. Were the site still surrounded by heavy industry, extending its life could be rationalised. But meantime ‘The Trees’ in Port Seton, the Appin Drive in the Pans and others had changed the landscape beyond recognition. Local residents, already incensed at the old coal station smudging their washing, did not want 30 more years of the same.

Withdrawal of such future plans has brought long-overdue closure. George Kerevan (East Lothian’s new MP writing in The National) bemoans “erasing yet another landmark of Scottish Industrial Heritage”. But I disagree: Robert Matthew may have been “one of our foremost Scottish architects” but his sixties brutalist creation here sat as badly in our rural idyll as the unlamented Royal Mile Midlothian County Council building once did in Edinburgh’s Georgian World Heritage Site.

So, in a much-publicised operation, Cockenzie’s twin chimneys were demolished. With inch-perfect precision, they folded against each other, creating a plume of dust as high as they had once been that drifted over Cockenzie itself before dispersing within the hour. Several thousand people had gathered on various vantage points to witness the spectacle.

Over 100 people gather on Gullane Hill to witness the event 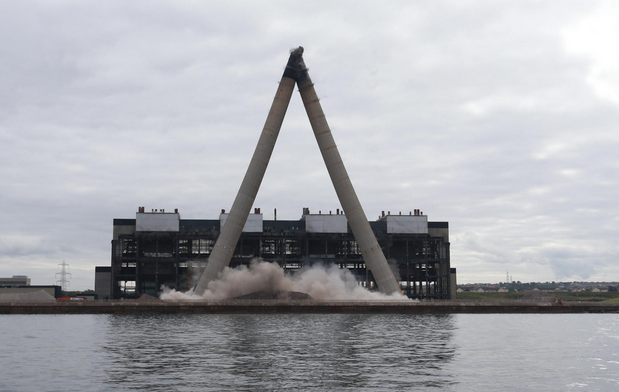 Now its site is available, Cockenzie gives East Lothian a unique strategic opportunity to grow our reputation for environment and tourism. It need not be the cruise/ferry port (see my earlier blog). But it must have vision, be environmentally friendly and bring much-needed quality jobs. And not create another eyesore like the one we just felled.