Why Yes is the Answer IV: to Pension Questions

Many of those still undecided how they will vote next month have an answer provided to them by their hearts but have yet to sway their heads on pragmatic concerns how life will turn out either way, based on credible figures. Prime among those concerns—especially for those over fifty—are pensions.

The UK does not have a particularly good record on providing pensions. Thatcher broke the link that raised state pensions with inflation then punted private pensions that were missold by the billion. This approach was continued under Blair and indeed worsened when Irn Broon raided private pensions and compounded during the 2008 fiscal crisis when many private pension pots lost half their value.

This left UK taxpayers with a third-world-standard state pension of around £5,500 in 2013. Although this is to be raised to £7,500 by 2016, this is offset by a rise in pension age to 67. In contrast, Finland provides £14,100 per annum. Norway provides some 75% of average earnings from the state pension alone—around £10,650, with occupational pensions topping this up further.

Private expenditure on old-age benefits is the highest in Australia, Denmark, Iceland, the Netherlands and Switzerland, where it exceeds 3.5% of GDP. How is it Alastair’s ‘Arc of Insolvency’ member Iceland can still afford better pensions than the ‘rich’ UK? The UK trails rather badly so if you’re looking for a pension to secure your comfortable retirement, you’d better have a private one or receive it from outside the UK. Even with the UK promising a standard pension for all and effectively increasing to by 2016, it still compares poorly, as shown in Table 1 from Which: 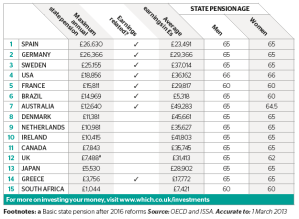 Even taking private pensions into account, UK lags in terms of share of GDP dedicated to pensions. All four Scandinavian countries, along with Germany, France and Italy exceed the OECD average of just under 10%; UK lags below 9%, behind even the USA.

So there really is not a lot to lose regarding state pensions for Scots, were they to become independent. That said, many people are concerned so here’s a checklist of ten major misgivings—and the corresponding answers:

Local ex-councillor, tour guide and database designer. Keen on wildlife, history, boats and music. Retired in 2017.
View all posts by davidsberry →
This entry was posted in Community, Politics. Bookmark the permalink.