Just now, most people are preoccupied with enjoyed the feasts and bounty of the festive season; many of the rest are simply puzzling how to pay for their end of it. As a result, this may not be the best time of year for anyone to be banging the drum for in-depth reflection. On the other hand, when else does anyone have a whole series of days post-Xmas that can only be partly filled by film re-runs on Channel 5, bracing walks into the teeth of the wind and another turkey sandwich/casserole?

And if these hazy days are not a good time to take stock of the country and its management, when is? Clearly this was on the Grauniad‘s mind when it commissioned ICM Research to survey people’s attitude towards politics, using 2023 adults aged 18+ online on 20-22 December 2013. Although this was UK-wide, it has particular relevance to the referendum on Scottish independence to be held in September.

The results make unsettling reading for professional politicians, their hangers on and any idealists that are counted amidst their ranks. As the article reporting on the survey says:

Asked for the single word best describing “how or what you instinctively feel” about politics and politicians in general, 47% of respondents answered “angry”, against 25% who said they were chiefly “bored”.

Negative sentiments vastly outnumber positive, with only 16% reporting feeling “respectful” towards people doing a difficult job, while a vanishingly small proportion of 2% claim to feel “inspired”.

In the years between elections, most elected representatives ride out unpopularity because the electorate has shown short memories in the past and starting any non-traditional pattern of voting to unseat specific incumbents is notoriously hard to do. What should be unsettling to the Scots is that, despite promises and good intentions to keep Holyrood pure of the braying partisanship on view at PMQ, we now have FMQs that have become indistinguishable in their braying partisanship. Most people are now put off by all of it.

Voter disconnect has become endemic among younger voters to the point where only 46% of sub-30s voted, vs 76% of over-65s did. Tory Chloe Smith has a ministerial brief that includes improving voter engagement. But she thinks:

“there is an existential problem coming for traditional forms of British democracy, which it is in everyone’s interests, all of us as democrats, to respond to. We have to demonstrate what politics is for, why a young person’s individual action in voting matters.”

This is equally true in Scotland, where the figures are even lower for deprived areas, swathes of which feel no incentive to vote because they feel their voice is ignored. Once upon a time, it would have been easy to blame that on Labour, who had represented such areas since Adam was a boy. But now the SNP represent as many such areas as Labour and have been just as monolithically party-loyal so that the voices of their constituents appear muzzled—even in those cases where they actually aren’t.

The result is a strong sense at grass roots that those who are elected ‘go native’ once there by kow-towing to party leaders and their politics and rarely take on the causes voiced by those who elected them: housing priorities in Arbroath or Ayr are driven by those in Airdrie. This sense then drives feelings that are not pretty. Gordon Brown’s former pollster Deborah Mattinson believes politicians have not begun to grasp the scale of the problem.

“Voter disengagement is getting worse and worse. Nobody is really taking it seriously enough.” 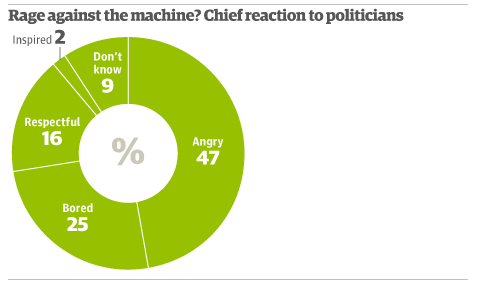 If this were a poll on doctors or teachers, there would be politicians jostling to be in front of cameras to deplore such a result and speak emphatically how it should be tackled. But you’ll be hard pressed to find anyone on salary (with honorable exceptions like Margo or Caroline Lucas) between the Thames and the Water of Leith ready to take such appalling statistics on in public, largely because they know them to be true.

Because they are feart for their careers.

Now, it is fair do’s that you can’t represent everyone But you must do your best to judge the majority view among your constituents and either make it your own or explain to your electorate your reasons for not punting their position. Some 86% of people (whether they vote or not) think politicians take decisions that are Very of Fairly important to their lives so we are not dealing with ignorance and misunderstanding here.

Russell Brand expressed the disaffection of many in October when he told Jeremy Paxman on Newsnight that he had never voted because he “can’t be arsed“, adding later: “The only reason to vote is if the vote represents power or change. I don’t think it does.” Even those who dislike Brand and his style admit the accuracy of his comments.\

Which brings us to the Referendum. Though it has allowed itself to be distracted into trying parry the ‘All-Is-Lost-Brigade” clammy negatives emanating from the ‘No’ camp, the Yes campaign has also failed to inspire the 30-40% of Scots voters still sitting on the fence, desperate for understanding why one or the other choice will better the lives of their children, not to mention their own.

Plain though it may be to hardened nationalists that independence ripens fruits of all ilks, that message has yet to arrive among the switherers whose otherwise even-handed objectivity and openness to persuasion has been deformed—not to say poisoned—by the fact that the clearly political campaign being run to persuade them is obviously sired out of the same stable as the four parties of the Apocolypse whose collective gobshite has soured the air of debate for years before next year’s momentous choice was more than a gleam in His Eckness’ eye.

The Yes campaign therefore faces a major dilemma, highlighted by this timely ICM poll: continue with a well funded/focussed myriad-SPAD-driven (and therefore blatantly political) campaign that has run for a year now with no traction and an increasingly steep hill to climb…

…dump everything successful politicians and their wolf packs of SPADs have learned in the last two decades—that dissent is poison; that policy is monolithically unquestionable; that, Rule 1, the Leader is always right, that, Rule 2, should he/she ever be wrong, Rule 1 comes into immediate effect. People want bonny fechters for their causes and not career-focussed lackeys. Because their is so much unknown, they want BOTH sides to be able to articulate a credible truth that lies somewhere in the middle between both camps.

The black-and-white-speak that fills each FMQ is now distinguishable from its English equivalent only by accent, not by content. November’s White Paper was beefy on many up-side arguments but piss-poor on facts/figures and dismissive of the (fair) case that there are risks involved taking a nation of 5.25m into uncharted waters. And what if it’s a 52% yes result on a 33% turnout? That’s a win—but how do you justify that morally to (let alone inspire with opportunity) the five in six Scots who didn’t vote for it?

If Fionn MacCumhail were to wake with his thousand Fianna so long asleep on our mountains awaiting our call and they were to scare the bejasus out of ALL our politicians so that they could speak only fairly and that from their hearts or if Wallace were to reappear and bang the modern equivalent of self-interested nobles heads together, would that ignite a real fierce, passionate debate on our futures that we all need?

If not, what would?: this is no rehearsal.

Forget the niceties of jousting within parliamentary rules and scoring political points that have zero value out in the real world. This is not just about next year’s referendum, major thought that is. It’s about the credibility of Holyrood itself. Was Bill Connolly right in this being “a wee pretendy pairliament”? And even if it does remain a devolved legislature of the United Kingdom, who will be inspired by it—let alone towards giving it full powers—if it is a jumped-up council, with council petty interests aping the tedious, self-importance of the Old Boys’ Club on the Thames because it knows no better ambition?

Local ex-councillor, tour guide and database designer. Keen on wildlife, history, boats and music. Retired in 2017.
View all posts by davidsberry →
This entry was posted in Politics and tagged ICM poll; independence; non-voting. Bookmark the permalink.