Despite being a strong proponent of a free press, like many other Scots today, I felt insulted by Scotland on Sunday’s presentation of a low-budget political dig masquerading as a book review of Gavin Bowd’s Fascist Scotland. What should have first tipped me off is that not many serious book reviews are written by the authors themselves—that and the more distasteful mock-up ever to have disgraced the pages of the Scottish Press. 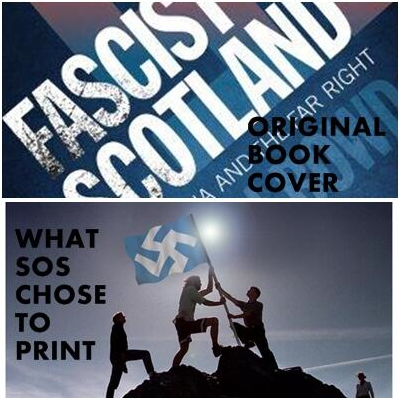 As another baby-boomer, I am particularly interested in the thirties as the cauldron out of which WW2 boiled and which framed so much of our lives post-war, from rationing and austerity, through Cold War and into material wealth. Because our excessively politically correct 21st century society pussyfoots around fascism and communism as failed 20th century evils about which we do not talk, there is merit in doing what Bowd has done, which is lift up a few stones of history and see what’s crawling beneath.

Though I didn’t live through the thirties, it was my parents’ heyday. The horrors of a war-to-end-all-wars had been banished, the Depression overcome and the fatal cracks in the Empire were not obvious to any but a few. But it was a time of great political questions, not least which political model would dominate the world. Britain was still fixated on its monarchy but even that received a body blow with Edward VIII’s abdication over the Wallace affair. The US was pioneering the relatively classless & materialist western democracy that would come to dominate seventy years later.

But the great debate of the time was which of two political extremes—fascism, as evolved in Italy and Germany, or Communism, as evolved in Russia—would come to dominate all else. Both the US and UK variants of democracy seemed weak and vulnerable before muscular movements from right and left that took hold across Europe. After Weimar collapsed and the Nazis walked into power, there were many both inside and outside that country who were pleased to see a major nation, prostrated and humiliated by Versailles, pull itself up by its jackbootstraps.

The irony of the time was that the two extremes of fascism and communism deployed such similar methods of both seizing and holding onto power. The Nazi-Soviet Pact of 1939 that allowed Hitler and Stalin to cynically dismember Poland for their own ends underscored how circular the whole political spectrum had become. It’s hardly surprising than that the ideological conflict that was about to become WW2 was manifest in political movements across the continent and a constant worry to ‘weak’ democracies.

Lindbergh in the US and Mosely in Britain had considerable following that performed an amazing snaw-aff-a-dyke act, once war was declared, much as the Whites disappeared from Russia once Lenin had grasped the reins of power. Conviction is a luxury to those whose livelihood, family and even lives were not under daily threat by regimes whose uncompromising diktats left little room for individual expression.

It’s hard today to turn convention on its head and see democracy as weak, indecisive and ineffectual, while either fascism or communism had an uncompromising purity of zeal about it, whether assembling massive tractor factories as part of a five-year plan or restoring backbone and dignity to a once-proud imperial nation. Just as the BNP makes some progress among immigrant suburbs of London, so Moseley’s British Union of Fascists made headway in heavily Jewish eastern suburbs of London.

So, before any of us gets to smug and superior about the robustness of our present democracy, the number of false political starts and their cost in stability and affluence should be borne in mind as original cost and investment. Not only were differing credos acceptable in the thirties but also served as vehicles of rebellion for many of the younger thinkers of the time.

So, coming back to Bowd’s oeuvre, the simplicity of its phrasing is deceptive. It uses contemporary sensibilities to tar the people of the thirties with loaded political overtones that they themselves would not recognise. In 1933, Hitler was seen as a saviour by most people outside German, let alone inside. The idea of a nation needing military backbone after the decimation of WWI, the destructive 1926 General Strike and 1929 Wall Street Crash was both common and lauded. Whether British or Scots in their patriotism, at the time many people saw the German rebuilding in a positive light—at least until Kristallnacht and the more blatant racism brought most to their senses.

And, as the iniquities of the more belligerent attitude adopted by Hitler in marching into first the Rhineland and then the Sudetenland made a darker future clearer, volunteers for the International Brigades to fight fascism’s Spanish curtain-opener were motivated by a socialist zeal, not least because a similar aggressive acquisitiveness was not yet so manifest itself in Stalin the way it was in Hitler. Scots, particularly those sympathetic to the socialist principles of John Maclean, were to the fore in volunteering.

Despite factually correct disclaimers like “Sir Oswald Mosley’s legion of blackshirts never made great headway in Scotland“, you will not get that impression from Mr Bowd’s article, which goes out of its way to give quotes from such prominent figures of the time as Hugh MacDiarmid distinctly Anglophobic overtones and is free with such phrases as ‘nationalist treachery’ with scant substantiation.

Indeed, such evidence as exists appears to be little-known reports of fascists infiltrating such organisations as the fledgling nationalist and socialist movements on behalf of the government of the time. But such was the political kaleidoscope of the time that few were of one rigid conviction and perhaps a majority changed political allegiance in the course of the scant twenty years between the wars.

But none of this precludes a rigorous examination of our not-s0-distant history with a critical eye. If Mr Bowd’s effort is to be faulted, it is for seeing the time too much through a modern prism where both fascist and communist have become pejorative terms in the current hegemony of Western democracy—a hegemony few but the brave would have predicted at the time when such namby-pamby concepts appeared in danger of being steamrollered by either Stalin’s muscular orthodoxy from the left or Hitler’s mechanised juggernaut from the right.

The politics of any age cannot be judged with contemporary sensibilities. Both Greece and Rome carried western civilisation to new heights on the backs of slavery, brutal conquest and even more brutal entertainments in the Colloseum. The dignity of Brize Norton was an unimaginable dream to more than a million British servicemen who died building empire across five continents, including 3/4 million who were left in France less than a century ago. It verges on cheap sensationalism to judge anyone in the thirties with smug use of 20/20 hindsight after half a century of soft living when none of the generations of young men have been sent off en masse into some foreign mincing machine. For ignoring this, Mr Bowd deserves to have his knuckles wrapped.

But, co-defendant though the author may be, by far the bulk of any opprobrium for the piece needs to be heaped on Scotland on Sunday and its editorial staff. Again, this is not for publishing something of this ilk. Much though it makes anyone’s blood boil, the Scots have weathered more venal insinuations that this. Not content to fire this dubious article at the nationalist community (why is it normal to speak of such in Ulster but not here?), SoS packages it across front page of the This Week section in a provocative and vitriolic way.

In their use of the word ‘Klan’ they have already crossed the line of decency. The only time that the Scots word ‘clan is ever spelled with a ‘k’ is in the context of the Klu Klux Klan, a discredited organisation found across America’s South and dedicated t racism and white supremacy. That they choose to use several symbols from Scottish Celtic history is no fault of the Scots—who see themselves as a mongrel race and therefore have little time for racism.

But to rub in this insult, SoS steals one of the uplifting images of the independence discussion in Scotland, the backlit image, used as a the cover of Devine’s seminal book. of several young people scrambling to erect a saltire using very similar imagery to Ernie Pyle’s classic WW2 shot of US marines struggling to erect the Stars and Stripes on a hill on the bitterly contested Pacific island of Iwo Jima.

Not content with those two crass insensitivities, they photoshop the image of the flag so that, instead of a saltire, the flag they are hoisting becomes a swastika. As a nationalist, proud of Scotland’s role in fighting nazism, proud that no-one has even been seriously hurt—let alone killed—in this battle for independence, proud of our genuine democratic achievements, I find SoS’s callously flippant use of such imagery cheap, nasty and palpably undeserved.

I need only posit the scenario of any Scottish paper running a parallel article based on the success Mosely found in England, especially the East End of London that led off with a St George Cross version of the swastika. The “off-with-their-heads” outrage among the Nomenklatura Angliski would have been deafening.

The good thing is that the dopes editing S0S seem not to realise the extent to which such ‘clever’ posturing is distasteful to the bulk of Scots and blatant attempts to smear that are patently untrue seem to wind up having the opposite effect.