It is a delight that East Lothian now has its own university and a shame that I take so little advantage of that fact. But on Tuesday, I took an opportunity to sit in on Prof. Joe Goldblatt’s class on Event Management at Queen Margaret University. The occasion was a guest lecture I had heard about by Prof. Richard Aaron of Georgetown University (Washington DC),

What impresses me about QMU is their pragmatic choice of subjects, among which is Event Management—one of those areas of endeavour like Apps writing that nobody even knew about a decade ago and thousands of people now make successful careers from.

In the hands-on manner of this kind of academia, Prof. Aaron is also President of Bizbash, a New-York-based business that tracks and publishes the methodology and key players behind successful events, such as the Superbowl, Oscars, etc. His lecture was entitled “Breakthrough Ideas for Your Career”. 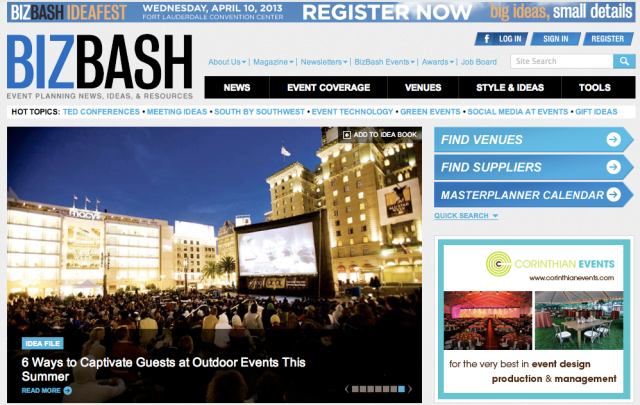 In such a dynamic field, the whole area could be dismissed as a ‘fad’, much as Political Marketing was in the noughties, proving to lack sufficient ‘weight’ to be taken seriously by mainstream academia. It would not be the first time that American academics have invented whole new careers for themselves on the periphery, but that it has never been taken up by heavyweight/mainstream academia, such as the Ivy League colleges.

More likely, given the proliferation of professional organisation of events round the world and the corresponding escalation of complexity, cost and specialist experience, it could be that Event Management will establish itself like Hospitality as a professional discipline that now requires professional qualifications to enter the business at its higher levels.

Richard Aaron presents himself as something of a guru in the field and the lecture was peppered with a series of thought-provoking statements, such as:

He regards a good event organiser as a “Memorologist”—someone who creates an experience so memorable that it stays with people long after the original experience is  past. In Aaron’s view, every great event starts out with a clear vision of what is required: how the event needs to ‘look’; what long-term outcome is the principal goal; a plan to engage the audience in a striking way; ideas how to create a lasting impression, a ‘wow’ factor.

He cited a number of examples, such as a Motor Show where guests could actually get into 4WD vehicles in a large sandbox and drive around, with a similar toy tay arena for kids, or Target’s launch of a new clothing range actually consisted of the models abseiling down the building onto the outdoor catwalk, or the press conference for the film “Day After Tomorrow” where the media were each given cushions to sit on the blocks of ice being used for seating.

Perhaps the most important lesson I took from the lecture is that you don’t have to be doing the Grammies and working with a budget of millions to make an event memorable. It would seem techniques from advertising are equally applicable (c.f. Apple’s famous 1984 ad during that year’s Superbowl half-time). Successful events can have considerable knock-on: New York’s Fashion Week is so successful that the clothing stores of the city now hold their own series of specials in the week prior.

What set me thinking was the extent of local applicability. Prof. Aaron used an idea I had originally heard from Joe Goldblatt—that a huge opportunity for an event exists in Edinburgh. Since Disneyland’s most popular ‘land’ is currently Harry Potter and Hogwarts exists more in Heriot’s School and J.K. Rowling’s local perambulations than anywhere else, why should Harry Potter not become Edinburgh’s fifteenth festival?

As for East Lothian currently, the presence of the Open this year would appear to have missed a trick to make it more than a functional—if professionally run—golf contest. It is an ‘event’ by default, but not by intent. The R&A may know about the mechanics but the relatively remote rural locations in which it is staged is a blank canvas upon which a vision and identity could be stamped. Thousands are brought to one place for one reason, without considering how to create memorable components for those thousands from the long summer evenings once the golf is done for the day seems an opportunity lost.

A theme throughout the lecture was one of sustainability, by which he seems to mean that it’s easy to throw money at events but that booking the priciest caterer and venue is not necessarily the hallmark of a brilliant wedding planner. More than anything, this served to convince me that Aaron and his colleagues are not just peddling more American razzmatazz but may actually have conceived a field of study with substance. As with plays or films or advertising, the world has become so sophisticated that a professional discipline for events is required too.

In East Lothian’s we already have a number of occasions like the Open and just need to work out the basis of growing them into class events that enhance the experience and benefit the local economy and quality of life.