Posted on February 2, 2013 by davidsberry

This week was a busy one. A few evenings back was the Gullane Community Council meeting in whose area the pretty little village of Dirleton falls, along with its 13th © castle. Bang next to the castle is the local farm, whose farmer took advantage of incentives to apply for a wind turbine for his farmyard.

As luck would have it, notification of the application went out to local councillors in the run-up to last Spring’s council elections and, despite efforts to have the matter brought to the full Planning Committee, it went through on the nod and into a real pitchforks-and-burning-torches public reaction at the construction within 200m of the castle.

Questions were asked why Hysterical Scotland—a statutory consultee in such cases and famous for its adherence to nitpicking detail—made no objection. The upshot was that they were invited to this meeting to explain themselves. To their undying credit, the relevant officials: Andrew Martindale (Head of Heritage Management East) and Rory McDonald (Senior Heritage Management Officer, Ancient Monuments East) duly walked into the lion’s den, armed only with PowerPoint.

For the thirty locals gathered at Aberlady Kirk Stables Hall, their best efforts to explain themselves were clearly unsatisfactory. Despite assiduous attempts to explain the finer points of ‘setting’ through ‘asset identification’ and ‘setting definition’ and ‘impact measurement (they have a whole set of guidance notes) it held all the clarity of Donald Rumsfeld babbling on about knowable unknowables and vice versa.

Bottom line amidst all the no-doubt-well-intentioned bureacratbabble was that the turbine, being sited in an already despoiled farm yard, did not merit their objection. The good citizens of the Gullane area are far too douce for anything as vulgar as a lynch mob. But HS should expect a fair number of subs and memberships coming from those post codes to dry up in the near future. A meeting of minds it was not.

Perhaps the best explanation for why such a well intentioned damage limitation exercise should go so awry is to examine the HS Org Chart that came as part of the presentation. I have seen few better examples of a visual metaphor for an dysfunctional rabble that little understands how to operate in the real world. 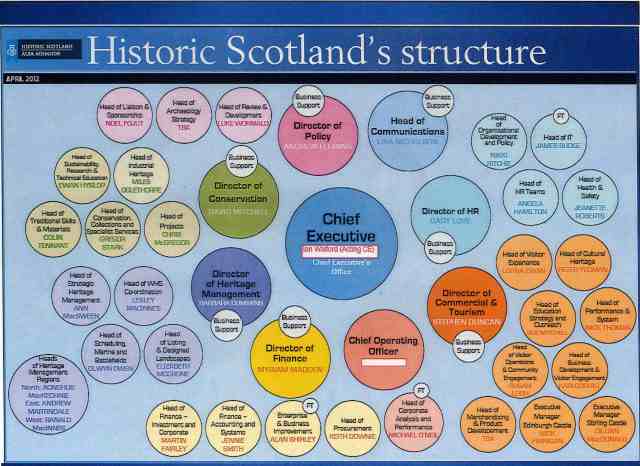 1 Response to Ah—That Explains It