Buried but not Forgotten

Posted on February 1, 2013 by davidsberry

This evening for the third time in the last few years, I put my head in the lion’s mouth as I dared to venture up to the West end of the county and deliver a talk on Mining in East Lothian. As with the other two times, the St Clement’s Men’s Club in Wallyford heard me out with patience and—as with the other two times—embarrassed me with the riches of recollections that brought a presentation of facts to life with their embellishments.

Despite the fact that the last East Lothian pit closed 47 years ago and last in this area (Monktonhall) over 15 years after a heroic attempt by the miners themselves to give it a future, there were ex-miners still in the audience and most of the others had fathers or uncles who had gone down the pit. This area around Wallyford has been steeped mining for a thousand years—since the monks of Newbattle created the main village street—Salter’s Road—to carry the surface-mined coal down to the salt pans along the coast below their Preston outpost.

Whether my flawed and incomplete history did a thousand years of hard graft, sacrifice of generation upon generation and tradition adequate justice is not for me to judge. Their generosity in listening attentively and then filling in much of the humanity as well as the details missing from my account was an experience for me that compensated me for my own shortcomings—such as how miners had to ride on top of the trams along the Bottom Pans because they had no baths at the pit, or being forced to work 2ft-high seams at Limeylands lying on their sides swinging a pickaxe for a full shift.

What was particularly striking was that any telling of such tales verged on the shy, was matter-of-fact to the point of dismissive, as if everyday facts of life that hardly need be remarked upon. These were not men figuratively chest-butting tales of accomplishments but people no strangers to hard graft in a hard environment simply telling it like it was. That dialogue after the presentation taught me more about mining and miners than several books, multiple visits to the Lady Vic and Prestongrange and extended hours trawling the web for details and pictures of the people who mined coal here for those thousand years.

And it is hard to find much photographic record of the mines themselves, let alone the once-indentured slaves who mined the black gold that drove our industrial revolution and Scotland into becoming the richest country in the world exactly a century ago. There are few snaps of miners above ground and almost none of the circumstances in which they worked—even the more modern conditions of new deep superpits like Monktonhall with its fluorescent lighting, its two-storey express lifts (3,000ft in 3 minutes) or the underground diesel trains to the face.

But I had found one picture of four miners at Fleets taken underground. And, as I showed this slide there was a laugh—one of the miners pictured was right there in the audience and I was able to fill in another tiny piece of this huge jugsaw. 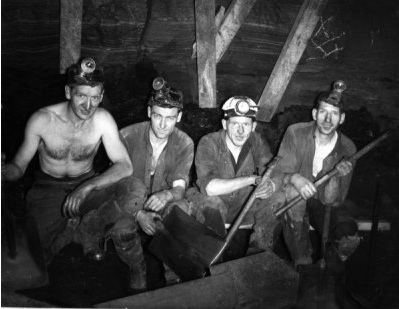 John is a lively 87 now but still carries a catheter from the time a charge went off prematurely and half a ton of coal buried him. Like most else about their hard life, as a miner he makes little fuss about it, or about all the other stories now long buried at the bottom of a thousand abandoned mine shafts all across the Central Belt.

Local ex-councillor, tour guide and database designer. Keen on wildlife, history, boats and music. Retired in 2017.
View all posts by davidsberry →
This entry was posted in Community and tagged mining; Wallyford; Carberry Colliery. Bookmark the permalink.