The problem with the best conference schedule is that it never allows for all the late-running fringe, subsequent social chats, rolling up ad hoc groups who then go to dinner and then winding up righting the wrongs of the world in the Salutation. All this means that, even with a tardy 10:30 am start to business, not all present themselves fresh-faced and ready for debate by that time.

Fiona Hyslop’s Culture Secretary speech having ben bounced from its proper spot by the hectic of yesterday’s NATO debate, I missed much of proceedings having been ambushed by an even stronger demo outside—this time against wind farms, as opposed to against NATO and nukes. 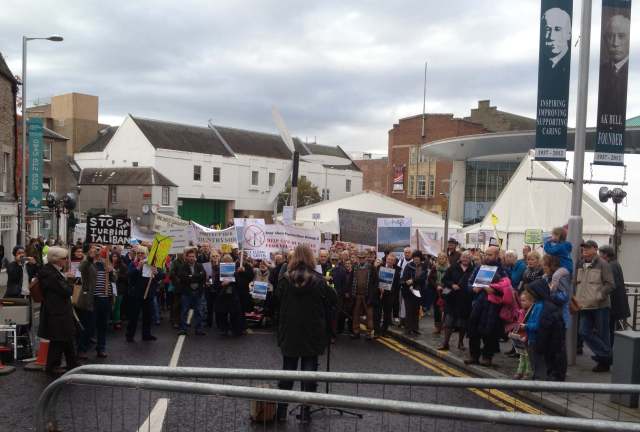 Although officially against all forms of wind power, talking to the demonstrators indicated a broader range of opinions than the protest speakers were implying. Talking to an Aberdeenshire farmer, he was against all structures in or near to settlements but quite happy to upset The Donald with the offshore farm visible from his Balmenie estate.

Another rural resident—originally from Germany—was relaxed even about wind farms on remote and uninhabited moorland but fiercely against the latest government tendency to permit smaller turbines almost anywhere and to provide subsidies to do so. When I cited East Lothian’s attempt to resist this and to win most appeals against our refusal, the demonstrators were surprised that any were being refused anywhere.

After a enlightening fringe meting on FAME (Future of the Atlantic Marine Environment) from Dr Ellie Owen who is discovering prodigious amounts of key environment informaion tracking seabirds and their feeding habits using modern GPS and miniaturised electronics.

Then it was in to the hall for largely motherhood-and-apple-pie Topical Resolutions that were all passed by acclaim in time for the Main Event of His Eckness’ speech, which started bang on time at 3pm. I could restate much of what has already been said about—and good, pragmatic speech, more full of content than gesture, but a really good piece as already been written by Burdzeyeview, which I throughly recommend.

Instead, I give you some visuals to complement the Burd’s excellent reporting.

Eck on Form with 800+ Attentive Supporters in the Audience

The Congratulatory “Lap of Honour” Starts at the Top Table…

As usual, Salmond was able to both sense and match the mood of the time and added both a call to campaign for 2014 in a way that harmonised well with the passionate but pragmatic debate that has characterised this conference.