After the unexpected fireworks of the first day, I was still fully expectant that the debate would heat up on Day 2 but it started earlier than anticipated with the Trade Union Group’s Chris Stevens giving one of the most articulate and impassioned speeches of the day in support of  Marco Biagi’s motion on private renting.

Before even getting into the hall there had been some lively demonstrating outside by the SSP and some friends, including the ever-amiable Colin Fox, which all added to the rather electric atmosphere of the day.

Chris’s contribution was part of the hour-long warm up of debates leading up to the ‘top billing’ motion 17 that was launched bang on time at 3pm to a hall so packed they had combed out visitors, media and any other non-delegates, so keen was everyone to do this right. Moved by Defence Spokesman Angus Robertson MP the Foreign, Security and Defence Policy Update included point 13, which—for the first time since 2002—called for an end to the SNP’s 30-year-long stance against NATO.

Although there were three amendments to the motion, ‘A’ (to remove specific budget for defence) while causing good debate, was handily defeated and ‘B’ simply reinforced the anti-nuclear stance and was accepted as part of the motion without serious debate. But it was amendment ‘C’ which essentially reversed the “pro-NATO membership on condition all nuclear weapons leave Scotland” stance embodied in point 13 that was the nub of the debate.

And debate it was. Angus MacNeil MP seconded the motion, Rob Gibson MSP made a strong case that a decision was not urgent and so this should be remitted back for further debate. Jamie Hepburn MSP who has ripened well from a somewhat erratic firebrand to a more subtle and persuasive politicians laid out the case for Amendment ‘C’: where was the need for NATO in our present day when Ireland saw no need for membership? Where was the supposed threat coming from?

What was clear from every speaker was the unity over removing Trident and fighting  ant successor. What the debate revolved around was whether having or declining membership of NATO was the best way to do that. Over two dozen speakers made their contribution on both sides (with dozens more having cards in to speak but not being called).

But Business Convener Derek Mackay handled himself impeccably, following procedure to the letter, clearing the agenda to make room for more debate and never losing control of what were easily the most intense 2 1/2 hours of debate since I first started attending SNP conferences at Dunoon in 1993. There were repetitions, there were weak speeches, there was the occasional dubious assertion that was left unchallenged. But it was as good an example of democracy in action as I have seen.

Which meant that I was at least as worried as the top table appeared. Having been one of those who badgered senior members to have this debate, judging from the applause for speakers who supported Amendment ‘C’ or who trashed NATO in their speech, this was not going to pass unamended. Justice minister Kenny MacAskill MSP pulled a barnstorming speech against ‘C’ out of this air but Jean Urquhart, Lachie McNeil and even first time speaker Natalie McGarry each countered with impassioned deliveries in its support to thunderous acclaim.

When Alyn Smith MEP stood to make a cogent case against the remit back that we were being naive and not understanding what it would take to make friends among the international community, a section of the attendees jeered and , as Angus Roberstson stood summing up for the motion along similar lines was the only other time the debate was marred by any jeers from the other side.

The passion and conviction was palpable and when Norman McLeod stood to sum up for the direct negative, it was to acknowledge a debate without rancour that had so affected him that he was barely able to complete his address without emotion overcoming him. After more than two hours—a record debate in my experience—everyone from both sides felt they’d had a good shake at making their case and were ready for results.

Counting the results were non-trivial as the hall was packed to capacity all the way up to the rear of the balcony. Amendment ‘A’ was clearly defeated, so there was no count and ‘B’ was accepted into the motion. It took five minutes for the stewards to clock all the votes on Amendment ‘C’ and it was a cliffhanger: 365 for, 394 against, so it fell. Then came Rob Gibson’s remit back, which also fell but by a slighter larger margin: 360 for but 425 against. Finally, the motion itself—amended only by ‘B’—passed by a clear but hardly overwhelming 426 for and 332 against. 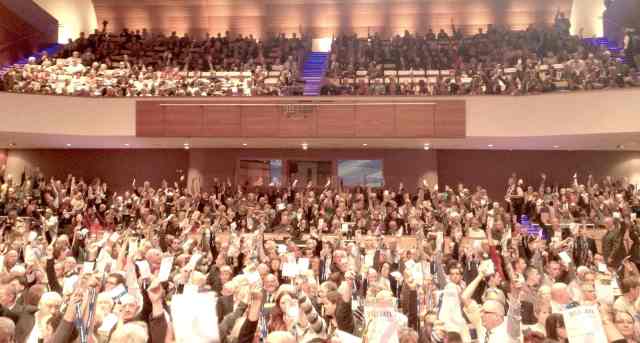 Votes For the Remit Back Being Counted

As a drama, it could scarcely have been better orchestrated. Although grumblings about leaving any party that could embrace NATO were heard afterwards from some, nobody lost sight that independence is an absolute prerequisite and the general mood was upbeat for as emotive an argument as this was. What illustrated that for me was, as Derek Mackay asked for a further extension of time to permit all the votes to be counted, a voice piped up in the hall “OK—but get 795 pizzas in first, will ye?”

The dozen fringe meetings after seemed like oases of calm by contrast but, since the CSPP Transport meeting with minister Keith Brown MSP was a km away at the Salutation and still well attended, it obviously takes more than a good knock-down drag out debate to take the wind out of the SNP’s sails and/or appetite for politics. 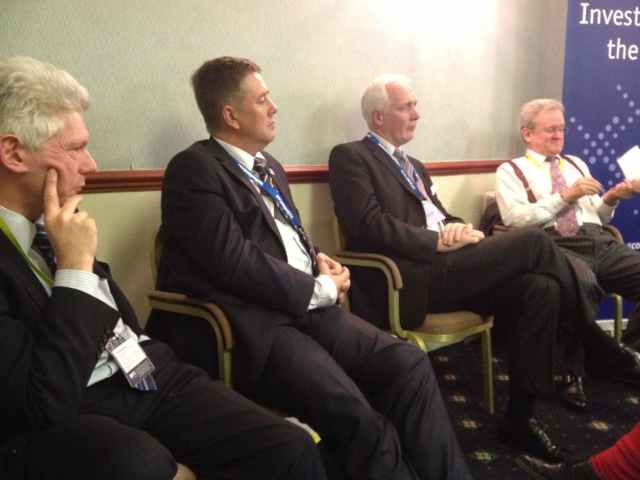 Local ex-councillor, tour guide and database designer. Keen on wildlife, history, boats and music. Retired in 2017.
View all posts by davidsberry →
This entry was posted in Politics and tagged SNP Conference; NATO; independence. Bookmark the permalink.