Lothian Buses has a history stretching back to the formation of Edinburgh Corporation Tramways in 1919 and a slew of recent commendations, including Best UK Bus Company (2002), Bus Operator of the Year (2007) and Top City Operator of the Year (2011). It runs the youngest bus fleet in the UK and they are generally held to be modern, clean and reliable to those who use them. And, since their main competitor, FirstBus, has thrown in the towel on many of its more rural routes a decade after it had given up competing head-to-head with Lothian on principal city routes, it could fairly be said that Lothian now rules the roost in the Capital.

So why am I about to excoriate them? Especially when, as that rare beast—a successful public company—they return a tidy profit to their ‘owners’? (Edinburgh City owns 91% and the three Lothian councils own 3% each).

Well, first of all, in their original incarnation during the fifties, they dismantled the once comprehensive tram system that ran from Granton to Braids and Musselburgh to Corstorphine. Leave aside what San Francisco has done to transform its Embarcadero waterfront by running vintage trams along it, if Edinburgh had simply preserved and maintained half the routes it once had at, say, £2m each year, that would still not have cost 10% of what we are spending today to resurrect their ghost.

In the same era, ECT was bullish about what its new Atlantean streamlined double-deckers could do: they were instrumental in persuading British Rail to abandon: Inner/Outer circle services through Newington and Morningside; a Corstorphine branch serving the zoo at Pinkie; Craigleith and Granton service; loop through Easter Road to Leith; all the little stations like Abbeyhill & Piershill on the way to Musselburgh. The wholesale butchering  of local stations left Edinburgh as the biggest city in the UK with no suburban rail service.

But, for ‘efficiency’ the new streamlined Atlantean buses were driver-only; without clippies, they spent inordinate amounts of time loading at each stop as grannies fished for change. Nonetheless, ECT forged ahead with more such buses until the back-platform Routemaster that you could hop on or off at the lights became a thing of the past. Increased traffic in the city brought even more sluggish routes until, in the nineties, the City Council’s transport maestro David Begg (now an academic) got his big paint set out and turned half the city streets into garish bus lanes.

It was just a few years prior that Maggie Thatcher had decreed a market free-for-all in buses and had abolished the regulation that had restricted ECT buses to services within the city and all others to services in and out of the city. For ten years, there was chaos as newly formed bus companies like Stagecoach and First cut each others’ throats for dominance in a given city market. FirstBus and the repackaged Lothian Regional Transport duked it out with flooding certain routes, scheduling their own buses to run a few minutes ahead of the competition. It was a mess. The only advantage the punter saw was a £1 flat fare all across the city where the two competed.

In 2000, LRT became Lothian Buses and, as the whole furore died down, they scooped a number of awards, as related above. But these were essentially for running ever more modern and environmentally friendly buses. The fleet had grown to over 600 vehicles and side businesses like the Airport Link and City Tours had been added. But there were still only 50-ish bus routes and it took at least as long on any of them in 2010 as it had in 1960. Passengers were riding cheaply in clean, comfortable buses. But speed was poor.

Even before the tram works and after a ‘no-change’ policy on fares, convoys of LRT buses would jam Princes Street or Nicholson Street as five tried to get to one stop at one time. The counter-move of creating more stops and spreading bus routes among them helped move things along for natives but still confuses the hell out of visitors. Anyone not knowing the City who arrives at Waverley by train has no chance of finding an onward bus anywhere (let alone the bus station): the stop for the 10/11/16 services to Bruntsfield is 1/2 mile away at the Mound.

And then there’s the profit Lothian makes—quite apart from what gets syphoned off for perfectly legal reasons—over £38m in 2010, despite recession and tram works. And that was after an relentless regime of bus replacements, of paying their MD a £208k salary (which includes a £48,100 bonus) and three other directors pulling in a nifty £145k each with a £49k sweetener on top (see today’s Evening News). They alone account for 1p on every one of the 107,000,000 fares Lothian collects in a year.

In less than ten years, fares have increased by 40% and while red diesel might have increased by that in the same time, other costs, wages and inflation haven’t. Paying the big cheeses a cool £200k each might be justified if this company had broken fresh ground, revolutionised public transport or otherwise transformed Edinburgh into a Mecca for pilgrims to good bus practice. But it isn’t.

Given that Edinburgh has; no rail services; mobile, affluent bus-riders; a booming tourism industry; a decrepit competitor in FirstBus and a parking regime that makes Devil’s Island look like a holiday camp, Lothian ought to be profitable. But what does it do with that profitability? New buses and environmental conscience are both laudable but hardly inspired: real competition would expose their major flaws:

They raked in a £38.6m profit in 2010. That means 35p of every fare taken (or 25%) was profit. That didn’t go to pay the high heid yins their £1m—that was already part of the costs. But 91% of profit (about £35.1m) went to Edinburgh City Council. That’s equivalent to each household in the city paying another £140 for that year in council tax. Nice trick! And this is how to ‘encourage’ public transport?

Where is the investment in Oyster-style cards where people slip on and off the bus like they do in London? Where are the clippies on routes to Leith who can help out baffled tourists trying to find Britannia? Where are the short, fast linking services using cheap, small buses through the sprawling suburbs that every European city has?

Lothian has taken a 1960’s model for a city bus service and done no more than spruce it up with new buses. A five-year-old with a stout abacus could make such an unambitious company profitable in such a cosseted environment. But 21st © integrated transport, such as you find in any European city, is a mystery to them—and will remain so as long as a suspicious cosiness between the City and its ‘arms-length bus company remains as thick as it is. 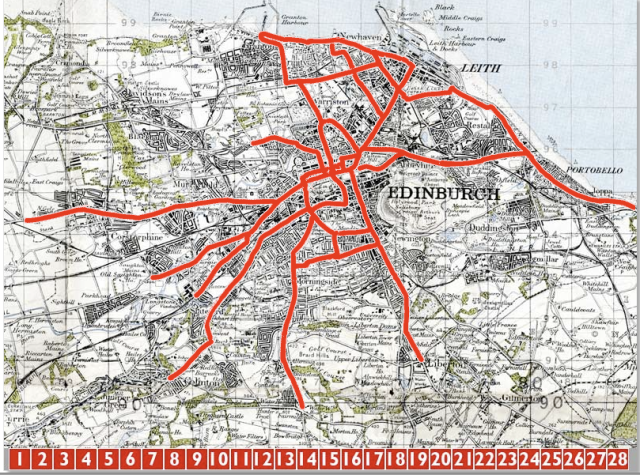 What They Threw Away 60 years ago—Edinburgh’s Tram Map, 1950 (source: see below)

Map copyright © David King and originally used without his permission, for which I apologise. Originally drawn by cartographer J.C. Gillham and published by Edinburgh Corporation. Permission has now been graciously given—see:

Local ex-councillor, tour guide and database designer. Keen on wildlife, history, boats and music. Retired in 2017.
View all posts by davidsberry →
This entry was posted in Transport. Bookmark the permalink.