Yesterday saw the first UK-wide doctors’ strike in decades. It was over proposed changes to their pensions and, although the government tried to play it down and a fair number of doctors showed up for work anyway, there were still thousands of appointments broken and hundreds of non-urgent operations cancelled. Anyone having waited for either to come round knows that can be a matter of month, if not years.

The doctors had thought they had a deal but the UK Department of Work & Pensions has made no exception for doctors in its brutal re-evaluation of what the country can afford to pay its public servants. Generally speaking, the public has been supportive, such is the high esteem in which doctors (and nurses) are generally held. A discussion on FaceBook received this (edited) response:

“They contribute more to the pension pot and, in the main, work long hours and have a job with great responsibility. I dont think it is too much of a reward at retirement. In comparison to bankers and what Westminster government wastes on Trident, etc. it is a mere drop in the ocean.

“All the while, Westminster’s squandering of money could be used to increase wages for the lower paid. Because doctors got generous pay rises under Blair does not make them responsible for Blair pushing others into doomed private pensions. Otherwise you could lose them to other countries.”

All fair comment. But a little rummaging comes up with a pay structure that has changed appreciably over the last few years. This is shown in the following table of NHS salaries: 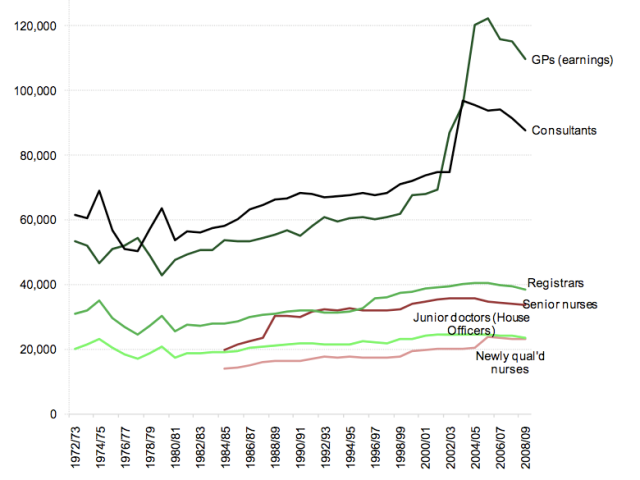 As well as showing the doctors’ huge boost around 2003, it shows the relative pittance for doctors under training and the modest salaries of even senior nurses. Compounding public envy of the scale of that boost has been a simultaneous decrease in GP willingness to work anti-social hours, resulting in fewer out-of-hours surgeries, home visits, etc. But is thee evidence that we are losing doctors abroad because the pay is so much better there? The chart below makes comparisons of salaries elsewhere: 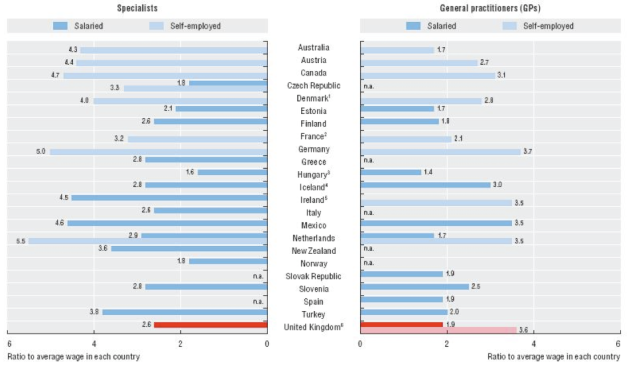 The results show things as at least comparable, with the self-employed (i.e. private practice) GPs doinf particularly well by comparison. Those interested in details of UK GP salaries can find them in the NHS publication GP Earnings and Expenses those for hospital doctors are given in Hospital Doctor Pay Scales. Bottom line is that most GPs will earn over £50k before tax, most hospital doctors double that and specialists or Trust CEOs serious six-figure sums.

But the dispute was about retirement arrangements. Instead of a lump sum of £162,000 and an annual pension of £68,000 upon retirement, the DWP wants doctors to contribute more, retire later and receive less. While unfair, this is no more than thousands of council workers, teachers, firemen and other public servants are being asked to do. All have complained, some have taken strike action.

Many of them (including doctors’ supporters) will agree with the assertion above, that “Westminster’s squandering of money” could provide the necessary finance. Trouble is, one man’s squander is another man’s defence system and, given the failure to date of either copious borrowing or quantitative easing to halt our fiscal slide, Osbo has no real room to maneuver—even if he wanted to.

So, solid though the doctors’ case may be that they had a deal, so did everyone else. And, since they pull down at least twice average earnings and would not get any better pay elsewhere, why they should not take some of the pain too seems a reasonable question.

Local ex-councillor, tour guide and database designer. Keen on wildlife, history, boats and music. Retired in 2017.
View all posts by davidsberry →
This entry was posted in Commerce, Community. Bookmark the permalink.