Not often our corner of the county gets the attention of the rich & famous but for the last ten days, we’ve had the production crew for Johnathan Teplitzky’s film of The Railwayman (from the book by Eric Lomax) camped out on Milsey Bay. The story is of a WW2 veteran of the infamous ‘death railway’ in Burma coming to terms later in life with the torture meted out to him during his years as a prisoner of war.

Shot in Thailand, Edinburgh and North Berwick, it stars Colin Firth as Lomax himself and Nicole Kidman as a nurse who first becomes involved with his tortuous personal journey and then becomes his wife. Names like that are quite a draw so the whole thing has become a highly entertaining hoot for locals. Since the production is at one end of the town, few are inconvenienced but curious crowds have been thronging the place and neighbours report an unusual number of locals walking their dog frequently in the area.

On Tuesday, a mass invasion of some 300 kids from the local high school almost brought production to a halt but good-natured intervention by the local polis kept everyone happy and lucky ones went away grinning with autographs and photos of them with Colin Firth. Managing to wangle me a set visit was the brilliant Film Focus team in Edinburgh (who have brought a raft of lucrative film productions to our area).

Thanks to Ros and Rosie’s faultless Film Focus PR, I was able to traipse around the set with Oliver Veysey the associate producer and Miglet Crichton the Location Manager, seeing how they’d crammed several sets into the terraced house they were using and marveling at the filmless, fully digital production systems now being used. Both director Johnathan Teplitzky and Cinematographer Garry Phillips seems very pleased with the reception they had received. Garry commented:

“When we arrive on set, there can sometimes be resentment at the intrusion to local life. Everyone here in North Berwick has been helpful, if rather curious. But we’re especially grateful that they have not insisted on spoiling shots by walking or driving past when we ask them not to. We rely on people’s co-operation; the locals here—even the swarm of kids who just showed up—have been great.”

Just seeing the amount of work that went into scene 47 was an eye-opener. Shot through the upstairs window into a front garden cluttered with tea chests and removal bric-a-brac  this scene depicts Mr Firth’s Eric confronting Ms Kidman’s Patricia moving in with him. It was fascinating to see several takes as the arriving Eric struggles with the mixed male emotions so many men must have experienced at equivalent watersheds in their life as his future wife’s presence sits ill with the bachelor chaos that characterises his home. 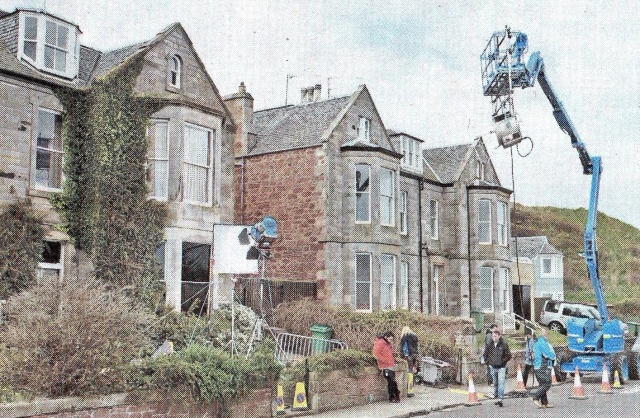 Exciting though the visit was, more exciting to me was that the Anglo-Australian production was using mostly Scottish crews (which will help sustain our film industry and encourage further location business) and that such a film will showcase our area. Exquisite shots of Colin Firth strolling along Milsey Bay framed by Partan Craig, the Bass and Craigleith in cinemas round the world is an ad we could never afford to pay for.

After the film is released (around September 2013), look for strangers wandering along Tantallon Terrace, arguing about which house The Railwayman was actually shot it.