Such has the scale of disconnect between the public and their elected representatives become that it is time to acknowledge those in service of the public who have clearly lost sight of that basic fact with an award. This month’s thoroughly deserving case, leading what may become a catalogue of ignominy, was brought to us courtesy of the Daily Mail. 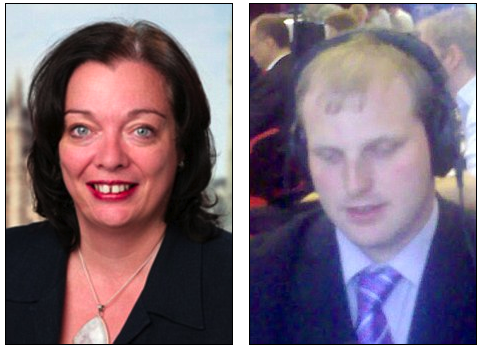 Our very first Oxter Award winner (l); Blind victim sworn at for being unable to see her (r)

TalkSPORT political editor Sean Dilley was walking with his golden retriever guide dog
in a corridor towards Portcullis House in Westminster. A clearly stressed Lyn Brown, MP for West Ham and Labour Whip bulldozed into the back of him before overtaking and shouting back at him: “For ****’s sake, move out of my ******* way.”

The journalist asked her to be more careful as he did not want to crash into his guide dog, Chip. “You are such a rude ******* man, you just walked right in front of me.” she retorted. Mr Dilley replied, not unreasonably: “I’m blind, you stupid woman.” When he asked  Miss Brown’s name, as he could not see who had bumped into him, Miss Brown replied: ‘I’m not giving it to  you: **** off!”

Local ex-councillor, tour guide and database designer. Keen on wildlife, history, boats and music. Retired in 2017.
View all posts by davidsberry →
This entry was posted in Politics and tagged westminster; disabled. Bookmark the permalink.

1 Response to This Month’s Oxter Award