Well that’s the official start gun for the so-called ‘short’ campaign, launched with the dissolution of wur Pairlimunt when our MSPs clean out their think pods and Eck desists from virtuoso demos on how FMQs should be done. He even managed to mention East Lothian’s new home equity assistance in his very last answer, using it to club Andy Kerr into what has become his habitual sullen look. Why students bothered marching when the SNP have promised no more (back- or front-door) fees was not made clear.

I met up with most of our 47-mere-mortals-again at a candidate briefing across the road at Dynamic Earth for as upbeat a launch as you could want. People in as tough a challenge as Bob Doris in inner-city Maryhill & Springburn or Aileen McLeod in the rural sprawl of Galloway have already done a pile of work and are raring to crank it up a notch for the final sprint. And if our opposition’s out there, they’re creeping around ve-e-e-ry quietly. 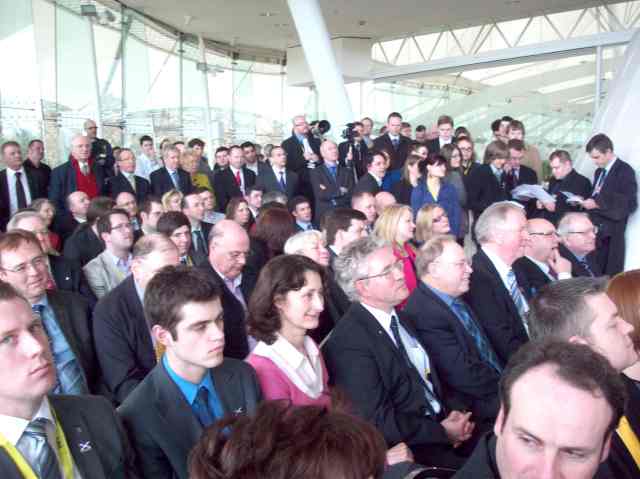 Local ex-councillor, tour guide and database designer. Keen on wildlife, history, boats and music. Retired in 2017.
View all posts by davidsberry →
This entry was posted in Politics and tagged Salmond; MSPs; student; demo. Bookmark the permalink.