An interesting set of statistics surfaced yesterday. Amidst a great deal of BBC and UK-level handwringing over worsening employment statistics, (England’s rising to 2.53m people out of work) Scotland bucked the trend, dropping 16,000 to 218,000 or 8.1%. And that was achieved while shedding 18,000 public sector workers and helped by 14.3% growth in construction employment.

This could be transient, or luck…or it could be the result of a savvy SNP government working with responsive SNP councils to slim Scotland’s bureaucracy while pumping investment into infrastructure and housing. Why else should Scotland buck a UK trend?

Looking more closely at statistics for the economic regions—as the Scotsman did—highlights a more subtle pattern. Labour rushed in to rubbish any positive reading of the favourable Scottish statistics but they would be better occupied considering why it is that, after over half a century of their dominance across much of the UK, poverty and economic blight should, from Dagenham to Dennistoun, remain the embarrassing hallmark of their dismal dominance. The table ranks UK ‘regions’ by unemployment. 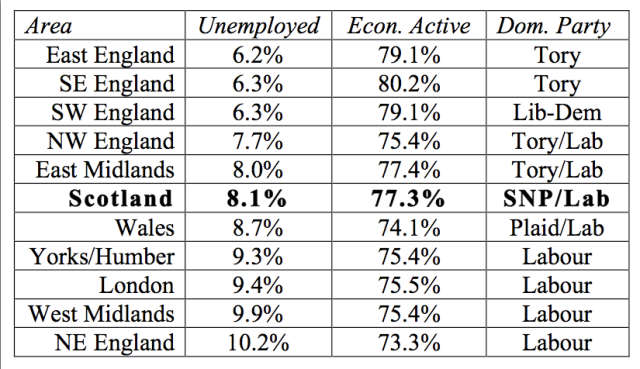 What is striking from the table is that Labour is inextricably linked with areas of high unemployment or low economic activity. To hear the Labour party, this is because it is the champion of the poor, the oppressed and the vulnerable. It is this loyalty to their champion that makes these areas such heartlands. However true this might have been back in Edwardian times, a century on is this still valid?

Or is it that those areas are condemned to economic hardship by Labour ‘leadership’ that is institutionalised nepotism that holds entire communities in social dependency and ‘jobs-for-the-boys’ paternalism? If Labour showed any ability to—let alone interest in—really helping those people on whose votes its existence depends they might grow out of dependency and actually gain the better life to which we all aspire.

Unemployment/Activity by UK region (from The Scotsman, Mar 17th 2011)

Local ex-councillor, tour guide and database designer. Keen on wildlife, history, boats and music. Retired in 2017.
View all posts by davidsberry →
This entry was posted in Community, Politics. Bookmark the permalink.