73: Archaeology of the Mouth

I was flattered to be asked by Paul, a budding local director, to do a brief Q&A on the whale’s jawbone atop our Law. He had decided that his assignment from Telford’s Digital Media course to document a statue lacked passion and opted to stretch the rules to our jawbone above his home town, of which he knew little. A landmark since 1709, there was some grief when the third (genuine) jawbone to crown the hill blew over in a storm in 2005 and was removed for safety reasons. Thereupon, I got it tight and regular from native and visitor alike that our Law “looked bare without it“.

Harming whales now being off-limits, ELC hit on making a replica out of fiberglass, courtesy of Ralph Plastics of Macmerry and funding by a generous but anonymous local donor. Since 2008 the bone-coloured replica has served well and should do for centuries.

As Paul and his crew of two bustled about in the bitter cold I warmed to my subject, describing Dundee-based whalers—hardy men in small sailing ships, including sailors from North Berwick. They it was who erected the first jawbone as a beacon above home. I felt like an ancient sea salt, passing folklore down generations. But you could tell from their eyes that this whole new dimension to their home town was as much an education for them as shot framing and sound levels on that chill day—and would stay with them. 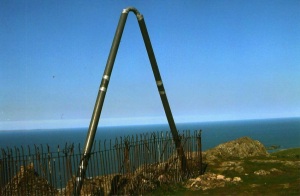 It's the Real Thing (Actually a fiberglass replica)