..the Scottish Conservative and Unionist Party, for the umpteenth year running. While this award is so richly deserved, it is hard not to feel sympathy for a number of sincere and honorable people who have dedicated much of their lives to this party’s lost cause. Current members from Jackson Carlaw down to the most marginal coffee morning attendee may  well rail at such trite dismissal. But it’s their own fault.

A party with a long and influential history in England, it reached a high level of influence with Disraeli’s government of 1874-1880, a time when British explorers led entrepreneurs, backed by the Royal Navy, to dominate and influence the world. Sadly, the Scottish Conservatives were a sickly scion of that robust tree, reputedly able to send all of its MPs to London in a single first class railway compartment. This is small wonder.

Whereas, in England, while the party’s grandees wee uniformly upper-class, the bulk of its members and support came from middle-class pillars of society—bank manager and shopkeepers who may not have been to Eton of Oxbridge, but were (in today’s phrase) “aspirational. The rise of the Labour and concomitant decline of the Liberal parties couched the political debate in class terms, which amplified this social stratification of party support.

A parallel stratification was at work in Scotland, but here it rather worked to their disadvantage.  Post-Culloden, the landed gentry mostly adopted London-centric English culture and accent, following the English practice of identifying the status of strangers by the way they spoke. Edinburgh had little to offer the ambitious that could compare with the  power, the finance and the gentleman’s club networking beyond the Faculty of Advocates and the Honorable Company of Archers. Support from landed gentry evolved naturally to include farmers. But what gave Scottish Conservatives a much-needed shot in the arm in the 20th century was their opposition to Irish independence. The ‘Unionist’ part of their title refers to unity with Ireland, not to Scotland. Their staunch support for the Protestant unionists of Ulster garnered them major support among the (larger) Protestant working class, specially in and around Glasgow. This was augmented post-WW2 by some shrewd intermingling of social events with politics; people attended their popular tea dances just to meet ‘nice’ people. 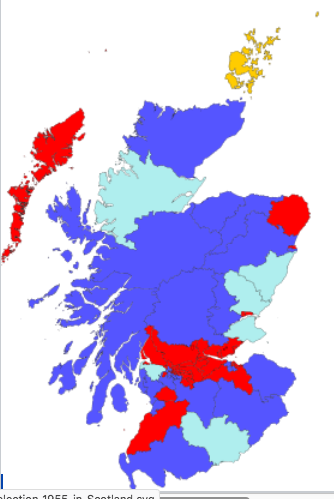 What a Difference a Lifetime Can Make—The 1955 Unionist Heyday

This helps explain the unique phenomenon of the 1955 General Election, when, for the first and only time, Conservatives gained over half the votes cast. But this was delusion. The rule of the landed gentry grandee MP was over. William John St Clair Anstruther-Gray lost rural Berwickshire & East Lothian to a dynamic Labour academic John Macintosh. The pragmatic and therefore popular Teddy Taylor held Glasgow Cathcart against a decimating tide of Tory unpopularity in Scottish cities, perhaps because he had no class pretentions.

Against a waning influence of landed gentry, no robust Home Counties and Shires base as exists in England, rampant Labour support in cities and a disappearing Protestant vote, Thatcher’s reign sounded their death knell. Despite her early reforms Britain so desperately needed, she never saw Scotland as more than a province (c.f. “The Sermon on the Mound“) and the patrician arrogance of Ian Lang and Michael Forsyth sealed the fate in advance of  the 1997 wipe-out.

The following decade in the wilderness did little to change their mood music. Having bitterly opposed the Scottish Parliament, their acceptance of (almost all list) seats in it did people’s perception of their integrity no good. The pedestrian leadership initially displayed did little to help

Then, along came Ruth Davidson, the breath of fresh air they so desperately needed. Suddenly, the SNP Government were being held to account by Ruth and her Tories than the denizens of Numptygrad who lined Labour’s opposition benches. Not only was she a breath of fresh air after the stilted mirthlessness of McLetchie, Fraser, Carlaw and Liz Smith but she appealed to thousands normally put off by Tory policies and history. From one solitary MP—the hapless David Mundell—she galvanised her party and the electorate to return 13 in 2017. In the 2017 Scottish elections, she led 31 MSPs into the chamber, becoming the official opposition and keeping Nicola Sturgeon and her troops on their mettle far more effectively than the carousel of Labour leaders had done.

But this renaissance was not to last. Cameron misjudged the mood of Britain regarding the EU, May misjudged Tory party loyalties and played her Brexit cards too close to her chest and Johnson has behaved like a political bull in our parliamentary china shop.

Sixty Years  After the Unionist Heyday

Any party that has lost one third of its support, as Labour has, needs to look at its policies in the light of who it seeks to represent. But a party like the Conservatives, who have lost TWO thirds of their voters needs to ask why it exists.

If Scottish Tories are content to be a minor, marginal party, they may well exist for some time. Landowners, farmers, businessmen, professionals and public school alumni, many of them seeing themselves as British more than Scottish, do form a natural base. But that is barely 10-15% of the Scottish electorate. A century ago, their forebears stuck their unionist heads in the sand over Ireland. The result was partition, bad blood, The Troubles, thousands dead and—ironically—the divisive Backstop that torpedoed May’s Brexit deal.

To break out of that ghetto and gain widespread appeal to seriously contend for power in Scotland, they must (however distasteful this may be to the Old Guard) listen to the people they claim to represent and break with their English colleagues on three major issues. This means:

I can already hear the Old Guard choking on their cornflakes at such outrageous proposals. But Scottish Tories cannot afford to be dragged j

kicking and screaming into independence (as they will be) the same way they were dragged to devolution. This would be political hari-kaei. And it would leave businessmen and professionals of a right-wing bent who are to generate and staff the economic renaissance that would follow ceasing to be the vassal of a stumbling England and joining the European community as a valued and active member

Or they can cling blindly to their rusting throne and let the tide of history engulf them, then sweep them away.