For the many of us not dazzled by the Boris Johnson “Christmas in July” largesse with the fiscal war chest so carefully scraped together by Philip Hammond in the teeth of austerity, the idea that Britain can suddenly hose money around like the proverbial drunken sailor is cause for deep misgiving. Because when a government—especially one lugging a £1,800,000,000,000 ball-and-chain overdraft—starts buying popularity,  hard times can’t be far behind.

There is no doubt Britain is a great country. The problem is that those running it don’t seem to ‘get’ that it’s not as great as it used to be. Ever since the humiliation of Suez 63 years ago, though clearly eclipsed, successive governments have strutted about “being at the top table“, “punching above our weight”, ” keeping the Special Relationship with the US“, and so on. Regarding science, culture o business, Britain can indeed claim to continue in the front rank. Unfortunately, it also claims a similar rank among the global political and military elite.

This, as embodied in the phrases quoted above, is delusion.

Being in the second rank with countries like France and Australia is no come-down: the former leads the globe in culture, the latter in sport. Tour the rubble of former industrial sites from Manchester to Sheffield to Tyneside to Clydeside to understand what we no longer merit a place in the pantheon of economic giants. Fortunately, it doesn’t take squillions to lead the world in culture, science or sport. But if, in Harry Truman’s phrase, you want to “walk softly, but carry a big stick“, big sticks cost big money these days—money we no longer have.

Even political anoraks have wearied of successive defence reviews, in which a defence budget cheese-pared from 4% to 2% of government spending has been stretched to cover strategic commitments for which it has long been inadequate. A budget of £45bn may sound generous, but it’s less than the interest we pay servicing out £1.8tn National Debt.  Two glaring examples of overstretch have left conventional forces badly underfunded and inadequate for the tasks expected of them. Forget Suez, we could not even attempt a Falklands-scale operation.

The first overstretch is the Trident fleet and its replacement. Forget the whole moral argument about nuclear weapons. If we want to defend our interests from REAL threats (e.g. tanker-snatching in the Gulf) and not some post-Cold-War paranoia, they have to go. The good news is that they are unlikely to be hostages to national disaster.

The second overstretch, to which we have committed only in the last decade, is the deployment of two aircraft carriers. A pivotal defence review 50 years ago decided that Britain should “withdraw East of Suez” and that, therefore, the Fleet Air Arm and its carriers should be scrapped. Reversing this has meant spending £6bn just to build the carriers and another £7.8bn to equip them with F-35 aircraft. Leaving aside massive shore-based requirements like logistics and training, no-one would send such a precious ship to sea on its own. Whenever the US deploys one of its carriers, it is part of a Carrier Strike Group and escorted by an Aegis cruiser, 1-2 destroyers and 1-2 frigates as well as supply and support ships.

The Royal Navy has a problem before either carrier sails. With only 6 destroyers and 13 frigates, they aren’t able to cove their present global commitments adequately. Given a third are always in refit, on R&R or on passage and the RN has no cruisers, even one RN carrier at sea would reduce total capability elsewhere on the globe to 5-6 ships.

Which is where things get dangerous. Politicians have a habit of pressuring the Admiralty to over-commit and the Admiralty has a history of ill-judged bravado against dubious odds, such as at Coronel in 1914 or against the Bismarck in 1941. But, perhaps the most egregious example of imperial bluff going horribly wrong was with the previous ship to carry the name of one of the new carriers: HMS Prince of Wales.

In late 1941, Britain was embattled, U-boats were rampant, the Wehrmacht were overrunning Russia and Japan was making trouble in the Far East. To dissuade the Japanese from any opportunism on Malay tin and rubber, the Admiralty dispatched the new battleship HMS Prince of Wales and the older battlecruiser HMS Repulse. But they were strapped for escorts and sent none. The un-escorted pair were caught by the elite Japanese 22nd Air Squadron off Koto Baru. Both were sunk, with huge loss of life.

As we have chosen to put 930 crew into a single £6.8bn basket we can’t afford to lose , I hope the Admiralty favours prudence over bravado and tells armchair politicians inclined towards puffery where to get off. Because a former Russian Akula class submarine commander, by then Naval Attache, caused a ripple of nerrvous laughter at a reception when he asked:

“You know what we call aircraft-carriers? 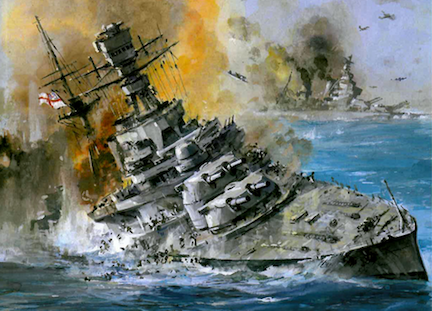 Local ex-councillor, tour guide and database designer. Keen on wildlife, history, boats and music. Retired in 2017.
View all posts by davidsberry →
This entry was posted in Politics and tagged carriers; fleet air arm; Prrince of Wales. Bookmark the permalink.