A Perspective on D-Day

June 5th saw extensive ceremonies around Portsmouth, followed by further ceremonies in Normandy on June 6th itself to mark the 75th anniversary of the Normandy landings when Western Allies stormed ashore at the beginning of a year-long drive to defeat Nazi Germany. Amazingly, some 300 veterans of Operation Overlord—all in their nineties— attended, many crossing in a specially  chartered ship to recreate their epic voyage and even two ex-paras who jumped with modern comrades from a fleet of C-47 Dakotas assembled for the purpose.

These veterans were rightly given pride of place and the memories of the 2,499 Americans, 1,564 British and 359 who died that day were accorded all honours, along with them. My dad drove his Sherman ashoe with 4th Armoued Brigade on D+1 and I am eternally grateful that he lived to tell about it. The reasons for and the success of the largest air/sea/land combined ams opeation the world has ever seen need to be remembered. Those who gave and those who risked their lives that we all might live in a better, more peaceful, more prosperous world deserve our thanks and to be remembered for what it cost them.

All that said, I have a couple of bones to pick with those who organised and scripted the event. Though the armada of ships and planes carrying 157,000 left from ports and airfields all over southern England, it was not a British affair. If the five divisions that stormed the beaches, two were Ameican and one Canadian. Of the three airborne divisions dropped inland to delay German response, two ere American. It was an international North Atlantic operation, but the ceremonies focused entirely on British armed forces and there seemed to be no sign of our American or Canadian partners. This seems a shame.

But more disturbing was the total absence of any mention of our Russian allies. That they were not present seems fair enough; they were not involved in the D-Day landings. But they most certainly were involved in the defeat of Nazi Gemany and deserve at least a passing mention. To put things in perspective, the eight Allied divisions of 157.000 men who assaulted Normandy in 1944 were opposed by four German divisions of 42,000. Well dug in as they were, the 91st, 352nd 711th and 718th Infantry Divisions were weaker second-rate formations, with only the 352nd having three regiments. Although formidable first-rate formations like 21st & 116th Panzer, Panzer Lehr and 2nd & 12th SS Panzer divisions would be thrown into the fray, they arrived piecemeal and devastated by relentless Allied air strikes.

Just two weeks after D-Day the Soviet Amy unleashed Operation Bagration on the Eastern Front against the German Army Group Centre’s four armies of 42 divisions of 840,000 men, 116 tanks and 3,450 field guns holding the key sector barring the direct road to Germany. Against this force of troops seasoned by three years of fighting, the Soviets launched 1,670,300 men, 3,841 tanks, 1,977 assault guns and 32,718 guns, rocket launchers and mortars in the four Belorussian ‘Fronts’ (Army Groups). The German position was not helped by Hitler ignoring the threat here and moving mobile reserves south to cover Rumanian oilfields.

Using rapid thrusts of Blitzkrrieg learned from their German opponents, the Russians sliced open the German lines, encircling and destroying 4th Army around Vitebsk and the 3rd Panzer Army in the marshes to the North and driving the dregs of  2nd and 9th Armies across the Vistula to Warsaw and over the borders of East Prussia. 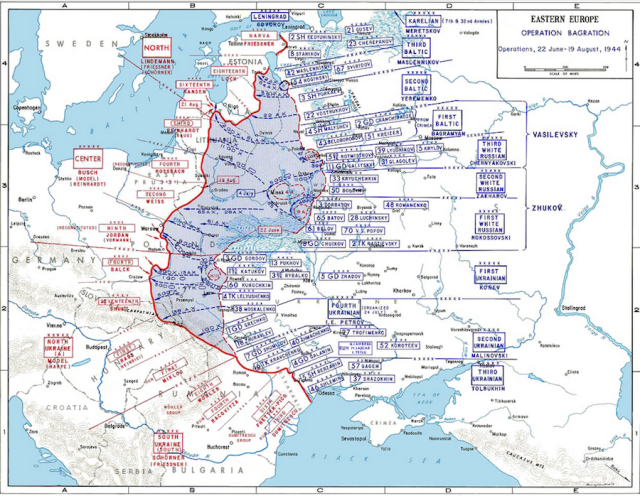 The German army never recovered from the materiel and manpower losses sustained during this time, having lost about a quarter of its Eastern Front manpower, exceeding even the percentage of loss at Stalingrad—about 17 full divisions or four times what the Allies dealt with on D-Day.

Since D-Day would have been either impossible or  a disaster without three-quarters of German strength and most of their best formations being tied down in Russia, it would have been nice to have given our other key Alliy a mention.

Local ex-councillor, tour guide and database designer. Keen on wildlife, history, boats and music. Retired in 2017.
View all posts by davidsberry →
This entry was posted in Uncategorized and tagged D-Day; Overlord; Red Army. Bookmark the permalink.