This week saw the first meeting for the upcoming season of NBBC . Who? Well,, it is hardly surprising our far-flung readership might not have heard en NBBC. But even most locals are equally in the dark. Now, before Auntie Beeb get all bent out of shape about a new broadcast rival setting up as the North British Broadcasting Corporation, let me assure them that North Berwick Business Collective is no such thing. It is the latest incarnation of the NB Business Association, which was in turn begat by NB Traders Association, which saw to the commercial success of businesses in the town for half a century.

Regular readers in search of this blog’s usual incisive analysis may feel the topic too parochial for their taste, but beer with us while we argue such an ad hoc collaboration may be the key to successful communities, as opposed to faceless suburbs and fragmenting society.

Back in the days of two-week bucket-and-spade holidays, the old town councils ran the show in North Berwick—and in small holiday towns like it. But the people most concerned with keeping holidaymakers happy where local retailers, who formed traders’ associations to persuade people to visit and entertain those who did. The result was a plethora of seasonal events: swimming galas; garden fetes; sandcastle contests; putting contests; etc. Visitors had a good time; traders made good money; everyone was happy.

The bloom in package jet holidays in the sun scuppered all this. Holiday town high-streets suffered the thing decay all other towns and malls and hypermarkets drained the retail business away. But in the last few years, people have more leisure time and more money to enjoy it. Two weeks in the sun I’m not enough—they want to go skiing, to explore their country, to visit friends/family, to have long weekends to do so. They are also tired of malls that all have the same Clinton Cards and Shoe Fair shops. Once they have done the monthly grocery shop at Tesco and dressed the kids for school at Asda, they hanker for some recreational shopping offering unusual items on a human scale where they don’t have to wander an airfield-sized car park in the rain.

Several Scottish towns have nailed this one: Pitlochry, Peebles, Kirkcudbright, St Andrews and Kelso—to name a few. North Berwick should be up there with the best of them (as could other pretty East Lothian towns like Dunbar and Haddington). But North Berwick already has two key advantages: 1) the Scottish seabird Centre is open all year and attracts thousands, including foreign visitors; 2) a regular ScotRail servers that puts it with them Half an hour obvious centre of Edinburgh. Unusual high-street shops, cafes and restaurants are already succeeding with their “recreational retail” offering. But, because both Scottish Enterprise VisitScotland and East Lothian Council are pretty clueless about this kind of business it succeeds more by luck than design. It could be a whole lot better.

Which is where North Berwick Business Collective comes in—and they don’t need millions to be a game-changer. A reason to visit?—Already have that = SSC. An easy way did get there?—Already have that = ScotRail service. Hard to believe but there is no alluring brochures for the town anywhere, let alone in VS TICs or bedroom packs. Hard to believe but there is no simple visitor guide with map of the town. Hard to believe but historic Scotland three Tantallon and Dirleton Castles as it they were on planets separate from each other and from the SSC and Museum of Flight, who reciprocate the ignorance.

Key to unlock this unnecessary one jam of mutual oblivion is NBBC. By distributing “Come to NB” leaflets across Scotland, they might increase visitor numbers. By running a pro-active social media campaign on top of the website, they will do the same. By welcoming visitors with a map and guide at entry points and in guest packs, they will ensure visitors enjoy all that is available to them and attractions enjoy maximum football. And, by banging a few heads, they might get attractions to benefit from visitors already on their doorstep with such radical notions as multi-access day tickets.

Fanciful? Ambitious? Perhaps. But it would take no more none of four-figure budget, fired up with chutzpah and imagination by a handful of believers to achieve. Some ground work has already been done by others. After the dreadful FirstBus stopped pretending to run bus services in East Lothian, the Edinburgh-North Berwick route has been provided by the clean and reliable East Coast Buses. And they have already cut a deal with the SSC—not for a joint ticket, but to advertise their Day Ticket on SSC member magazine and show the SSC is on their route. Not much…. but a start. It will be up to the NBBC to get better ideas—and run with them to show how the heart can be put  back into our high streets… and, as a result, into our communities. 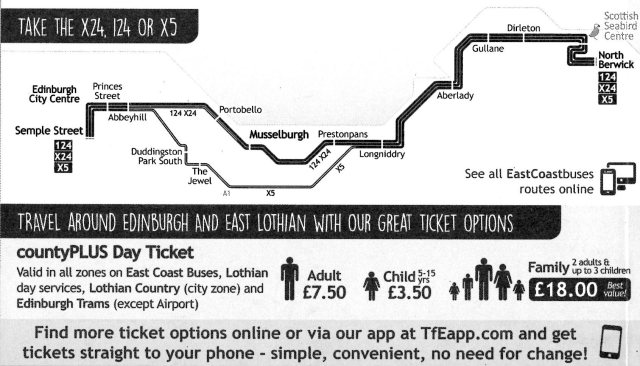