Posted on December 3, 2016 by davidsberry

Jet-lagged and shocked by temperature differentials, this may not be cohesive. especially after a 3-month hiatus in writing this blog. A month in the capital of Arizona is a real experience of the American Dream writ large. At 4.3m people in its metropolitan area, it is the largest of all US state capitals in both people and area, at 2,969 sq km. That’s seven times the population of Edinburgh spread over twelve times its area.

And, unlike Edinburgh, Phoenix and its surrounding suburban cities of Tempe, Mesa, Glendale, Scottsdale, etc have virtually no historic centres or convoluted existing street layouts to preserve. Although founded in 1881, it was a small agriculture-based town until after WW2. Powered by the same aerospace and tech boom that stimulated Los Angeles and Silicon Valley, development of air conditioning and the flat desert landscape allowed the booming city to be laid out in a classic grid pattern impeded only by chapparal scrub, saguaro cactus and the need to pipe water in.

Whereas most booming US cities are hemmed in by mountains, sea or agriculture, Phoenix has no such restriction. It laid out numbered N/S avenues to the West and Streets to the East of Central and squared them off with named E/W roads at regular intervals, starting with Baseline in the very South. Even supposedly autonomous cities like Glendale fit into this pattern. All of them are laid out in a generous pattern of two lanes in each direction with protected turning lanes in the median and a forest of traffic lights at each main intersection.

What this allows is an amazingly (and confusingly) regular mixture of tract homes and industrial sites with gas stations and retail malls at major intersections. It also allows a diffuse development that makes LA look dense by comparison. Large tracts of untouched desert still with tall cacti and palo verde trees intersperse settlements. especially near the periphery. Make no mistake: this is a thriving city, averaging 4% growth for the last 40 years and whose Sky Harbor airport is rated the best in the US.

Most of all, this is a car-based society. Not only are streets wide but distances are huge—as are parking lots and premises; Home Depot is typically 400m long and covers an area of over 50,000 sq m. And that’s without the 0.2 sq km parking lot in front. Pedestrians are, needless to say, a rarity. People think little of driving 30 miles to & from work or go to entertainment or even for a meal. There is a downtown that includes the usual office skyscrapers and cultural hubs like Symphony Hall and the Art Museum but it does not bustle with life and would not be recognised as a city centre by many Europeans.

Developments made recently are the sine qua non refinement of tract housing but are over 20 miles distant from downtown and. Here streets are curved, relatively short, child-friendly and dead-ended, with the pricier lots being laid out around a golf course or a lake. Four-bedroom and swimming pool is standard—with a 3-car garage (3rd slot for a golf cart). Though much of the planting is desert flora, Arizonans are profligate with water, tending lawns and decorating such developments with streams, waterfalls and fountains.

This high-income, affluent lifestyle with plenty menial labour around to support it is pretty much an embodiment of the American Dream. This has put Arizona politically in the Republican camp and the local tendency is not to think globally or about vague futures when there are businesses to be run, families to raise and bills—especially medical and school fees—to pay. As a result, with the exception of the latino population, Trump did well here in the recent election and took all 11 of the state’s delegates.

Phoenix may represent the apogee of Western consumer civilisation—at least for those with the money. But social segregation seems entirely related to salary. The golf-course-and-lake suburbs are pure ‘white bread’. By contrast, although over a quarter of the population, they are seen in such areas working in nearby retails shps, country clubs and restaurants—or driving in/out of those areas as gardeners, pool services, cat-sitters, cleaners, etc. Asians are not unusual but a black face is rare, other than around ASU, downtown or the older neighbourhood along 19th Avenue.

These latter are more apparent on public transport, which does exist. Indeed the Metro Valley Light Rail could teach Edinburgh trams a thing or two. Consider the contrast:

Generally, Edinbugh does not come out too well. MVLR uses more flexible 3-segment usnits that can be coupled into trains as long as three, which makes for flexible demand response.A typical station is show below. 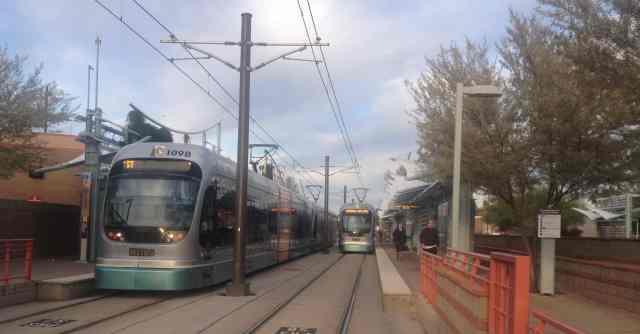 Virtually all the lines run down centre dividers on main streets so the layout follows a zig-zag pattern through the street grid. This can cause trouble with drivers who are still unaware of just how much damage even a glancing blow from a speeding tram can cause.

Result of a Truck trying to Turn in Front of a MVLR Tram in Tempe AZ; No-one was Hurt

Large trucks such as the damaged Ford F350 shown above are hugely popular, despite their gas-guzzling nature. But, with gasoline at barely $2 a US gallon (40p a litre) there is little demand for fuel efficiencyimpressively better thought the MVLR system may be than what we have achieved so far in Scotland, it serves as small a fraction of the city population as Edinburgh Trams do.

Which means over 90% of all business, shopping and commuting is done entirely by car and over large distances. As long as gas hovers near 40p a litre, such a lifestyle is affordable. But what if there’s another ‘oil shock’ as happened in the 1970’s? Or if the entire American population of 330,000,000 want to have sprawling homes and drive everwhere, this utopia for the few would not be sustainable. Finding jobs near their homes—let alone ones that are walkable/bikeable is unrealistic. Property prices would fall, people strung out on debt would default and the main asset on most people’s ledger—their house—would become a liability.

Good thought their trams are, they counld not provide a network dense enough, let alone afford tp build such a huge extension, to sustain the city. Which would shrink and revert to the desert from which it sprang.