Posted on November 6, 2015 by davidsberry

According to SCVO there are over 45,000 Third-Sector organisations (i.e. charities) in Scotland, employing a total of 138,000 people with a turnover totalling just under £5bn each year—getting on for 10% of our GDP. Many of them do sterling work and are bulwarks against the worst effects of modern society, market-driven economies and the increasing complexity of 21st century life. 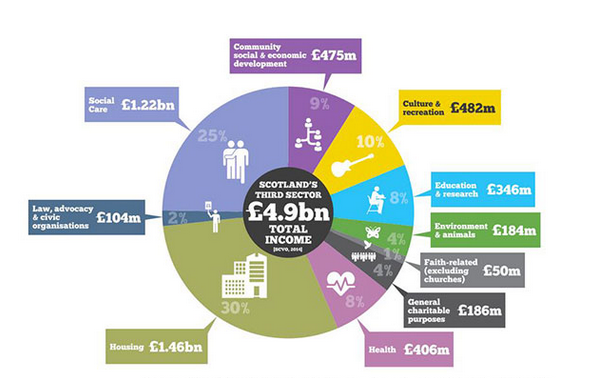 In general, Scots are generous in their support for what is now a massive sector. But, just as the NHS—laudable though the great majority of its front-line staff are—suffers from pencil-neck jobsworths and third-rate administrators, not everyone in the third sector is a selfless hero(ine) working for the good of all, as opposed to themselves. High streets across Scotland are filled with charity shops, staffed by volunteers who receive nothing for their time. But running these large operations are salaried ‘professionals’ who are just the tip of the third-sector salary iceberg.

Even the SCVO itself is a charity with two members of staff on more than £60,000. There are more than 23,700 charities in Scotland but OSCR will stop short of revealing the pay packets of top staff. Charities Aid Foundation, which has carried out a study said “Many people remain concerned the money they donate may not be used to best effect“. Given they found poorer families were proportionately the most generous, with those earning less than £9,500 a year most likely to give away around 4% of their earnings, such coyness seems a travesty.

Not included in the above is the quangocracy that has spread across Scotland, with similar well paid jobs that are equally obscure where the public is concerned. A Quango (Quasi-non-governmental-organisations) is “an organisation that has responsibility for developing, managing and delivering public policy objectives at ‘arm’s length’ from government. Such bodies assist in the delivery of public services in Scotland including culture, healthcare, the environment and justice.” They have a long history of operation in the UK and have become an established part of public sector delivery. At least charities have a public profile through shops, adverts, street collection, volunteering, etc. Quangos are much more a mystery. Yet Reform Scotland has established:

That totals to over £78m or £25 each year for every man, woman and child in Scotland. And Scotland is a small place. Where once ‘The Establishment” (i.e. senior advocates, Heriots/Fettes FPs, the Honourable Company of Edinburgh Archers, etc) controlled many senior job placements, since devolution there a new kind of mafia grew up in the revived political firmament who also know one another and regularly show up in plum jobs.

The growth in quango numbers and budgets has meant significant expenditure streams are largely invisible to the public who pays for them. As Reform Scotland says:

“The current lack of openness and accountability is not conducive to good governance. Power exercised by government derives from consent of the people and should be exercised in their interests. It is difficult for people to judge whether that is the case when the current way blurs accountability.”

Research on quango spend on PR, overseas travel, external consultants and hospitality/entertainment comes to an annual total of £113m. This breaks down as:

Buried within the above (and surely deserving of deeper investigation) are:

This last item alone should set alarm bells ringing. When people are dying forgotten in our most modern hospital, when other budgets are pared to sustain the NHS’s, when Health Boards’ competence to oversee their multi-£m empires is under serious question, what are they doing squandering your money on ‘hospitality’? £1m buys a lot of custard creams.

There are, for example 24 board members of Lothian NHS Trust, headquartered in the prime office space of Waverley Gate (the old GPO building) at outrageous cost to the public purse and none of which assists a single patient. As an example of its ‘transparency’ its Annual Report and Financial Information doesn’t even mention ‘remuneration’ or anything as sordid as ‘pay’.

Both main parties seem content to sustain this irresponsibility. While the Scottish Parliament engages in an unedifying rammy over what to do with a putative £113m that may come their way from 50% of a devolved Air Passenger Duty, they might dig into the £200m listed above and many more such dark corners.

Our Labour opposition might think of waking up and combing through all the slumbering numpties they appointed 1999-2007 for efficacy and the SNP government do the same for their profligate appointments since. Because, from a country that once grew rich from building things for the whole world, we now specialise in featherbedding mediocre administrators into ever-more-expensive cushy numbers across our burgeoning charities and quangos. Because our riches are no longer self-generated, this is unsustainable.

Independence or no, unless we wake up, winnow our bloated quangocracy and knuckle under to steer people into jobs that emulate Switzerland (high-end services) Singapore (major trading entrepot) or Germany (precision manufacturing) our Byzantine third sector moguls will join those shoals of globetrotting/factfinding (but never doing anything) board members on the burroo with the rest of us.

Local ex-councillor, tour guide and database designer. Keen on wildlife, history, boats and music. Retired in 2017.
View all posts by davidsberry →
This entry was posted in Commerce and tagged quango; charity; third sector. Bookmark the permalink.