I have reported on the terrific work that 100+ volunteers have done on the Forth Islands to protect the indigenous puffin population from being crowded out of house and home by an invasive plant. What follows is the latest report from John Hunt, redoubtable organiser of expeditions in all seasons and all weathers to deal with the threat.

SOS Puffin is a volunteer project sponsored by the Scottish Seabird Centre which started in 2007. It aims to bring under control the invasive plant tree mallow which has taken over the islands of Craigleith and Fidra near North Berwick and threatens the important populations of nesting puffins and other seabirds.

The last summary report was sent to volunteers in May 2014 and this report summarises what has happened since then. Any comments or queries are very welcome.

The following tables show the number of work parties to Craigleith and Fidra each month (with the number of man/woman days shown in brackets) since the project started. Note that the gaps between April and August are because this is the nesting season.

Note: The trips during the months starred above were organised by the RSPB but most of these also involved volunteers from SOS Puffin. In addition to the above, the RSPB organised three other work parties during the autumn of 2014. During one of these some of the tree mallow on the cliffs (hazardous to access) was cut.

As can be seen, significantly fewer work parties have taken place in the last 3-4 years. This is mainly because the task has got less but also because a high proportion of planned work parties have been cancelled because of the weather and other factors.

We hoped to fit in a trip to the Lamb where there is a small amount of tree mallow but in the event suitably calm conditions for landing did not arise at times when a boat was available.

It is pleasing that new volunteers continue to come forward and there are now over 650 people on the volunteer data base. However work parties are heavily dependent on a small group of enthusiasts who come regularly – six of whom have now helped on more than 50 occasions. David Ross reached the remarkable number of 100 work parties in September. It would have been a close-run thing between David and Margaret Wight as to who reached this milestone first if Margaret (who has done 90 work parties) had not been unwell during the autumn. I am glad to say that Margaret is now recovered and was back in action again on Fidra in December. 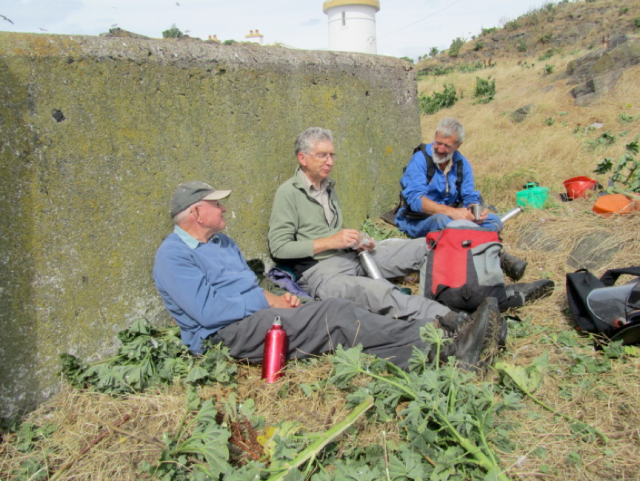 From August until October we were able to use the Seabird Centre’s large inflatable and our thanks to Colin Aston and his skippers for taking us out. This boat came out of the water at the end of October and will not be available again until March.

Local boatman Dougie Ferguson conveyed the RSPB work parties to Fidra in his launch Braveheart. He is not willing to land on Craigleith because of the risk of damage to his boat.

What has happened on Craigleith?

Throughout the summer there was very little tree mallow to be seen and puffins and other seabirds will not have been troubled at all during what appeared to be a successful breeding season. Tree mallow was later than ever making an appearance and it was not until August that small seedlings became apparent; by September there were extensive seedlings on the south side of the island and locally elsewhere.

This meant that seedlings being cut during the autumn were quite small with none more than one metre high. Only five work parties were possible during the autumn and considerable areas of seedlings still remained after the last visit in early October—most on the south side of the island. It will be interesting to see if the rabbits deal with these during the winter and there are signs at the time of writing that they are already making an impact.

On the Summit of Craigleith, October 2014

During a dry summer the rabbit grazing created extensive bare areas of soil in those areas with a high rabbit density such as the Glen on the south side while their digging led to some localised erosion and soil collapse. 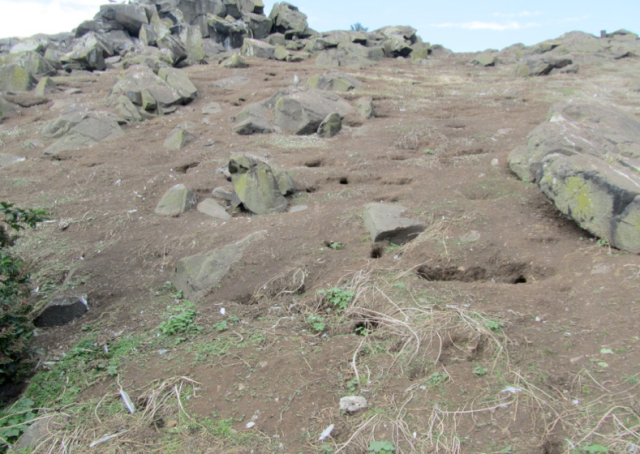 Nettles of both species continue to increase into areas previously covered by tree mallow – this helped by the rabbits which do not normally eat nettles. The Annual (or Small) Nettle was very noticeable over large areas during the summer but being an annual plant may not become a problem. However there are a number of large permanent patches of the perennial Stinging Nettle which are clearly spreading and can pose a problem for young eiders and puffins trying to reach the sea. These patches of nettles contain almost no other plants or puffin burrows. In total they extend to 0.4 ha which is significant on an island only 7 ha in extent.

Stinging Nettles on Craigleith. Elder Bushes in the Foreground and Background.

What has happened on Fidra?

When the first work party visited on 9th August, it was noted that tree mallow had returned to the usual places with some seedlings up to two metres in height (though most were smaller than this) but seedling densities were again a little lower in most locations than in the previous year. Two areas which we did not manage to cut last Spring flowered and seeded which was unfortunate though these were not areas used by puffins.

The four work parties in August and September plus those organised by the RSPB ensured a reasonably thorough cut of the whole island including some of the cliffs. However there were plenty of mallow seedlings evident for the final work party to tackle in December and it is expected there will be no shortage of plants needing to be cut in the Spring. 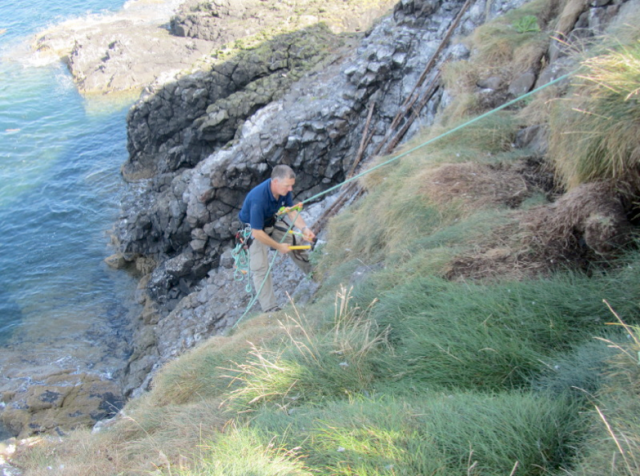 Extreme Mallow Bashing by an RSPB Volunteer on Fidra

The annual meeting of the Craigleith (and Fidra) Management Group was held in October. Rene van der Wal from Aberdeen University who carries out the ecological monitoring on Craigleith reported on his work as follows:

It was agreed that further spread of the perennial Common Nettle was likely and undesirable and that a trial control programme should be devised which might incorporate sowing of grass seeds.

It was agreed that a volunteer engagement project looking at SOS Puffin should be carried out by a PhD student Marie Pages. Marie would like to understand why people decide to take part, what sustains their involvement and how to enhance their experience. A Questionnaire was sent out to all volunteers in late 2014 and the findings will be made available to everyone in due course. Over 70 responses have been received to date and thanks to those who took the trouble to do this.

The management plan for Craigleith has been updated and anyone is welcome to have a copy by email.

A programme of work parties for March and April will be circulated to all volunteers in February. It is likely that less work parties will be planned than previously since it is anticipated that there will be comparatively little to do on Craigleith. The aim will as usual be to ensure that both islands are effectively clear of tree mallow by the time the puffins return in April.

We expect to carry out a trial control of Stinging Nettles on Craigleith during the summer subject to the details being agreed by the Craigleith Management Group. This would be a small operation and it is not intended that the project should switch from controlling tree mallow to nettles!

We are not planning to do a puffin burrow count on the islands this year but may do so in 2016.

It does seem that a turning point has been reached in the project. Less work parties are now required to keep the tree mallow under control on Craigleith thanks to our efforts over the last eight years combined with the more recent impact of rabbits. On Fidra a considerable control effort is still needed but the extent and density of tree mallow is slowly reducing. With the RSPB increasing its own contribution to the project, less SOS Puffin work parties may be needed on Fidra in future.   We shall continue to monitor what is happening and react accordingly.

SOS Puffin has been running now for eight years with almost a thousand volunteers helping on 213 work parties to date – 145 to Craigleith, 66 to Fidra and two to the Lamb.

Very many thanks to everyone who has helped – as volunteers and in other ways. Our thanks also go to Viridor Credits, SNH and others for their generous funding of the project. I look forward to seeing many of you during 2015.

Local ex-councillor, tour guide and database designer. Keen on wildlife, history, boats and music. Retired in 2017.
View all posts by davidsberry →
This entry was posted in Community, Environment and tagged puffin; seabird; volunteers. Bookmark the permalink.