Today finally came and, with it, a climax of energy that has been building across Scotland over the last two years. I can’t claim to have much of a clue of what’s going on elsewhere (I’ve heard that a phalanx of women marched into a Glasgow polling station singing ‘Flower of Scotland’) but I have been round all six polling stations in my North Berwick Coastal ward and am mightily impressed with what I found.

First of all, the customary boards were there in greater numbers and, in the absence of candidates and parties to promote, are actually carrying messages. These two at North Berwick seemed to sum up the differences between the campaigns.

I have stood at polling stations for every election in this area since 1994 and have never seen what I saw today. Turnout is immense; normally sleepy Gullane had a queue out the door, across the car park and part-way up the street when it opened at 7am. The 20% of all voters have sent 95% of their ballots in and still they were pouring through the doors.

But much more than at party elections, people were bringing their kids, stopping to chat, making the whole event more carnival-like. This feeling was heightened at North Berwick in the early evening when three rather fine young pipers showed up and started entertaining both the poll gate checkers and the flood of people going in to vote. Only the wee dug seemed perplexed by the noise.

Three Pipers play. NO on the left of the door YES on the right

At Whikeirk, a resolute YES supporter staked out the place where no party has ever thought it worthwhile to do so before (barely 300 voters) but there she was with her camper chair, brolly and flask of coffee. At Aberlady, the same Presiding Officer of two decades of elections there was saying he’d seen many people he knew who had never been to vote before—some had to be guided in as it’s the most difficult polling station to find.

In Gullane, the douce ladies with the blue NO rosettes seemed particularly discomfited by having non-local NO ‘colleagues’ in red NO rosettes so close for so long. In fact that was a theme common around them all—NO presence far higher than any single party manages at a normal election. But, more than that, a high level of anxiety, if not actual stress among NO workers that seemed entirely absent from the YES side. Some worked it out of themselves with intense conversations, largely with YES workers who, in turn, seemed relaxed…but were having trouble coming to terms with no longer being the underdog.

Two hours to go on a two year campaign and the word from East Lothian is that everyone deserves credit for engaging with the public and galvanising them to participate on a scale that may be unprecedented. Since it is such an important vote, it’s a real victory for democracy. Incidents of egging, shoving and heckling did occur—but what other country has come this close to independence with no deaths and no injuries stemming from it?

And, if the turnout does exceed 80%—as it well might—that will make any relatively close result (e.g. 52% to 48%) still be conclusive so we can all wake up on Friday as friends and get on with the next phase of Scotland’s future. But, down our way, despite emotions running high, this election went off splendidly—so splendidly that the local polis had a chance to take their eye off roit control and get themselves a decent selfie. 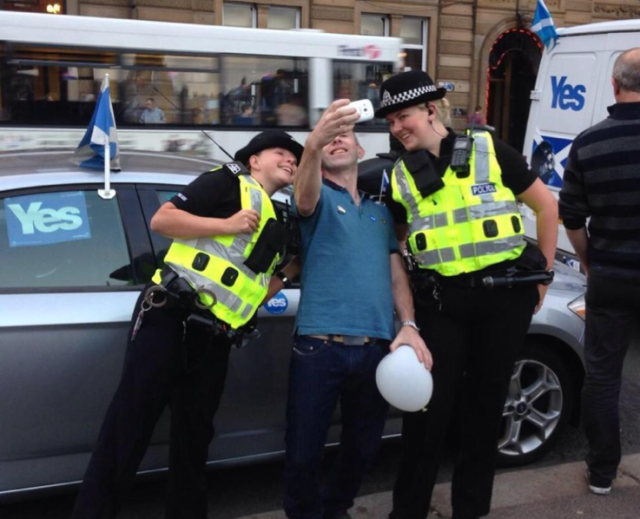 Some of Lothian’s Finest Allow Themselves to Be Distracted into the Indyref Mood.

Local ex-councillor, tour guide and database designer. Keen on wildlife, history, boats and music. Retired in 2017.
View all posts by davidsberry →
This entry was posted in Community, Politics and tagged indyref; polling; turnout. Bookmark the permalink.