In the run-up to the referendum, the media din and dubious behaviour of politicians and even seasoned journalists who should know better have made it harder for those still to make up their minds where to garner relevant data. As a committed Yes supporter I do not pretend to achieve total objectivity. But the Wee Blue Book, published by Wings Over Scotland comes as close as I have seen to a rational analysis. Look for installments of the booklet here in the run-up to Thursday. The first section is Principles and Politics. 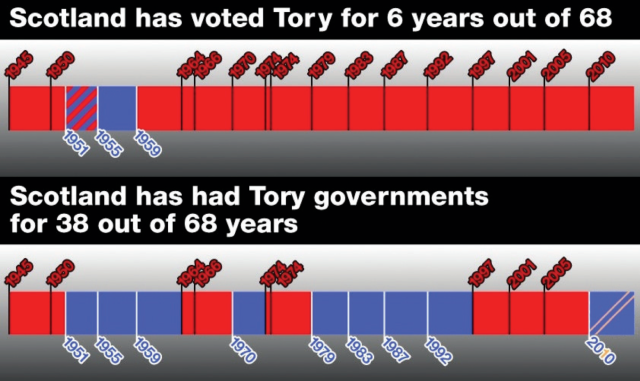 This is perhaps the simplest aspect of the debate to deal with. Scotland rarely – less than half the time, in fact – gets the governments it votes for. Scots have voted for Labour at every Westminster election since 1955, but by the time of the 2015 election will have had Conservative governments they didn’t want for 38 of the last 68 years.

Whether you support Labour, the Conservatives, the SNP, the Liberal Democrats or anyone else, that’s not democracy. With all due respect to Wales and Northern Ireland, 85% of the population of the UK lives in England, and that means that in practice England always decides what government everyone else gets.

Most of the time (roughly six years in every 10, for the entire modern political era dating back to WW2) that’s been a government Scotland has rejected. We believe Scotland is a country, and therefore should get the governments it votes for every time – not just when it happens to coincide with what a much larger neighbouring country wants.

That doesn’t mean it should be ruled by the SNP. If you don’t like the SNP or Alex Salmond, you don’t have to vote for them in an independent Scotland – Labour and the Lib Dems were in charge for the first eight years of the Scottish Parliament and could be again. But so could brand-new parties that don’t even exist yet – it’s only a few years since nobody thought the SNP would ever win an election.

Independence isn’t about policies or parties. Those are questions which will be decided at elections, not the referendum. All you have to decide on the 18th of September is who should choose the future governments of Scotland: the people of Scotland, or the people of England?

Q: “But won’t we be abandoning the people of the rest of the UK to permanent Conservative rule?”

A: No. Scottish votes almost never make any difference to the outcome of UK elections, and when they do it’s a very small and short-lived one. Scottish independence will NOT condemn the rest of the UK to permanent Conservative governments – almost every Labour government since WW2 would still have had a comfortable majority without any Scottish votes.

A: The unit of measurement for democracy in governmental elections is nations, not cities. No government ever gets 100% of the vote, and indeed it’s decades since any UK government even managed 50%. Some individuals or regions will always get a government they didn’t vote for. But the referendum hinges on whether you think Scotland is a country or just a region of one. It can’t be both.

Local ex-councillor, tour guide and database designer. Keen on wildlife, history, boats and music. Retired in 2017.
View all posts by davidsberry →
This entry was posted in Politics and tagged wee blue book; referendum. Bookmark the permalink.