After a mild spring, North Berwick has so far been blessed by two days of sky-splitting sunshine over the weekend and the place is going like a fair—boat trips out round the islands well loaded and not a pavement cafe seat nor parking place to be had. Which makes us glad we took the chance we had when this weather arrived mid-week to run the final ‘mallow-bashing’ trip of the winter.

The plague of sea tree mallow, know locally as ‘Bass Mallow’ because it grew on Bass Rock—probably planted there by a travelled lighthouse-keeper who saw the advantages of large soft leaves should the loo-roll supply be cut off—is by a beast of a plant:

“Lavatera arborea tolerates sea water to varying degrees, at up to 100% sea water in its natural habitat, excreting salt through glands on its leaves.This salt tolerance can be a competitive advantage over inland plant species in coastal areas. Its level of salinity tolerance is thought to be improved by soil with higher phosphate content, making guano enrichment particularly beneficial.”

In other words, on seabird-rich islands. The 150,000 gannets now on Bass Rock have pretty much blitzed vegetation off there and so keep it under control. But on other islands like Fidra and Craigleith with no gannets and only small auks like puffins in residence, the reverse is true; the puffins’ burrow-cleaning operations actually providing a welcoming seed bed of soft soil at each entrance. At one point, the puffins on Craigleith were being confronted with 2m-high mallow ‘forests’ they couldn’t land in and 3-4cm-thick stems outside their burrows that acted like jail bars.

Thankfully six winters of a volunteer army of ‘mallow-bashers’ organised by John Hunt under the auspices of the Scottish Seabird Centre have hacked down generations of new plants as the zillions of seeds in the soil have germinated each year like some night-of-the-living-dead zombie movie. 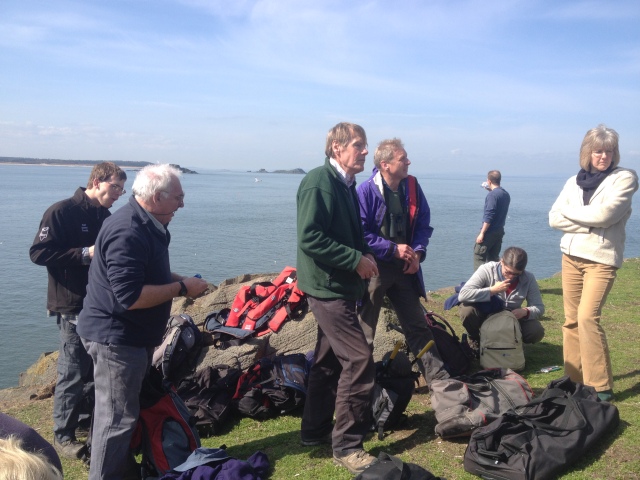 Only after we had combed the island from end to end did we realise that, with the exception of a few mature plants low down on the cliffs too dangerous the access, that there was no work to do. Hard work from earlier squads had dealt with the larger plants and our allies the rabbits seem to have decimated this season’s mallow seedlings. The giveaway was the shortness of the grass (see pic above). But the absence of mallow cover and the fine Spring weather has allowed the native grass and other plants like worts and nettles to reassert their cover so that seedlings will have an even tougher time next year.

So, there was nothing for it but to settle back to enjoy our packed lunches, the magnificent views and catch up on a little early sunbathing. Having served on a number of squads it is hard to describe with what relish you find yourself presented with such hedonism when you had braced yourself for the prospect of a day’s hard labour. 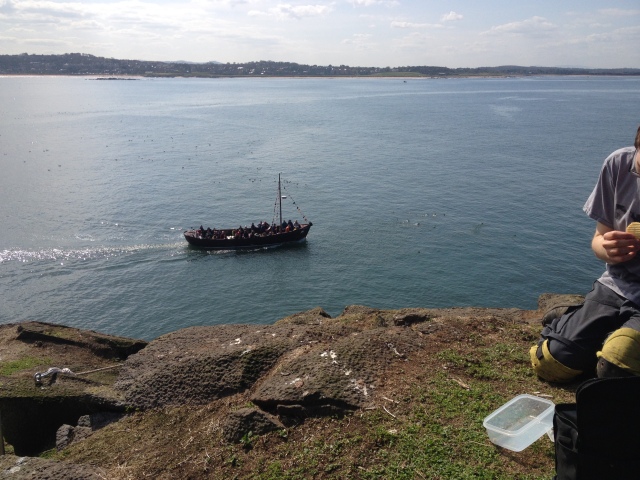 A Well Loaded Sula II Passes, with North Berwick in the Background

Gratifying though it was to realise what had been achieved by the hard work of hundreds, the sun-blessed feeling of stolen apples was yet more enjoyable still.

Local ex-councillor, tour guide and database designer. Keen on wildlife, history, boats and music. Retired in 2017.
View all posts by davidsberry →
This entry was posted in Environment and tagged mallow-bashing; craigleith; puffins. Bookmark the permalink.