Two years after the event, no-one has yet penetrated the ruins of what was once the Fukushima nuclear power station and all fifty Japanese nuclear plants remain out of commission until someone comes up with a safety plan. Nonetheless, news out of there has been a little thin of late: the world has continued quietly on its way without really taking stock and learning lessons.

But we all received a timely reminder when this last week was bracketed by two events that nobody appears to have thought to link together:

Given these are on opposite sides of the world, what possible connection could they have? With the decommissioned Hinkley ‘A’ and operational Hinkley ‘B’ already on-site, would it not be logical to add another to the isolated site where a plentiful supply of Bristol Channel is available as cooling water? And since UK nuclear reactors have given decades of reliable and carbon-free (OK -light) energy, how else are the lights to be kept on?

Well, for one thing, Scotland is developing its renewables at such a pace and the present plant exports some 20% of its power as surplus there is a valid argument that no more conventional power stations are needed in Scotland. For another, while the UK’s nuclear safety record is indeed good, here are some disturbing facts, to spite that:

This latter brings us back to zunny Zummerzet. There are no high sea—let alone tsunami—walls around ‘A’ or ‘B’ at Hinkley, nor is there to be one at ‘C’. Engineers and geologists do not regard the Bristol Channel as seismically active  and so consider such walls superfluous. But there is a reason not to be quite so glib. All parts of the globe are subject to some seismic activity, especially in areas of now-dormant plate boundaries and the flat Somerset levels are no stranger to flooding, having been sea in Roman times.

This is not just about the huge tides in the Bristol Channel that can swing water levels by 14m and create the Severn Bore, nor that, historically, the Levels were once just marshes much like the Fens. But in the winter of 1607, both coasts of the Bristol Channel were hit by a flood that sounds far more like a tsunami than any storm-surge-on-a-Spring-tide that typifies most UK coastal floods.

Whatever caused it, it was sudden and resulted in the drowning of an estimated 2,000 or more people, with houses and villages swept away, an estimated 200 square miles (518 km2) of farmland inundated and livestock destroyed, reaching inland as far as Glastonbury and wrecking the local economy. Although patchy and scientific, several accounts survive implying no ordinary flood:

This last is very similar to descriptions of more recent tsunami, such as the eruption of Krakatau in 1883, where accounts refer to the sea as being ‘hilly’. The reference to dazzling, fiery mountains and myriads of arrows is reminiscent of accounts of tsunami on the Burin Peninsula (Newfoundland) in 1929, where the wave crest “was shining like car headlights”, or in Papua New Guinea in 1998 where “the wave was frothing and sparkling”.

But, if it was a Fukushima-style tsunami, what might have caused it? Some fifty miles Southwest of Donegal, the shallow Continental Shelf on which Britain sits falls away into the Atlantic abyss, plunging thousands of feet in a few miles. Taking the Boxing Day (2004) tsunami originating off Ache/Sumatra as a model, a subsea earthquake there dropped a section of the seabed by many metres over a distance of many miles, displacing huge amounts of water that created a tsunami felt all around the Indian Ocean. The Fukushima tsunami appears to have come from similar vertical movement.

It is just speculation—but highly plausible—that a similar event was caused by a section of the Continental Shelf breaking off and sliding into the deep ocean abyss would displace huge volumes of water that could create such a Tsunami. And, if it has happened once, why might it not happen again, especially as the Bristol Channel amplifies the magnitude of such events as the water is squeezed into its ever-narrowing funnel. Perhaps this happened more than once but the sparsely populated west coasts of Ireland and Scotland may not have noticed or the jagged coast may have absorbed rather than amplified it.

But in 1607, Burnham-on-Sea did have its sea wall entirely overwhelmed by water. As Hinkley ‘C’ is  3 miles away but has no plans for even a vestige of sea defences, perhaps EDF can review this piece of 400-year-old history and—somewhere in the £16bn costs involved—find the lolly to provide something sufficiently robust at least better than the late-lamented but nonetheless highly relevant Fukushima. 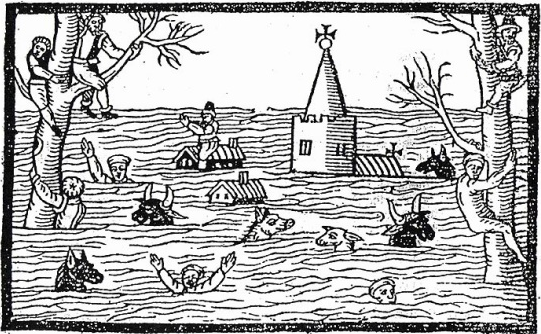