Lesley Riddoch—never one to mince words—has a powerful piece in today’s Hootsmon in which she pithily observes ‘Public money is trapped in professional silos‘ and that ‘Good public health is a product of good social and democratic health‘. All very true and, coming on top of Eddie Barnes’ piece in the sister Scotland on Sunday the previous day deprecating that the ‘cost of sickness benefits in Scotland is one-third higher than in the rest of the UK‘, is as blunt an accusation that Scotland can’t look after its own as we have ever seen.

And while both articles are worth the read and pose serious questions, neither get far down the road of answers. “Glasgow Manchester and LIverpool share similar ‘deprivation profiles’, but premature deaths in Glasgow are 30 per cent higher”; “Scotland’s higher claimant rate for ESA, IB and SDA is due to the fact that its working-age population is older and less healthy than the GB population”; “Scotland spends £1.5 billion on emergency admissions of old people—the majority of whom have no serious clinical problem”.

Compared to 100 years ago, we have health and social provision the Edwardians could only dream of. We have over 161,000 working for the NHS, 51,000 teachers and 5,200 social workers, as well as 46,400 civil servants and around 200,000 in the rest of local government. On top of that, 183,000 work in related charities (and this does not include volunteers). With all this well intentioned firepower we should all be rich and healthy. But, whereas our Edwardian great-grandparents enjoyed the richest per capita GDP in the world in 1910, we have slipped some. The statistics become especially stark when you compare our Life Expectancy with Healthy Life Expectancy. 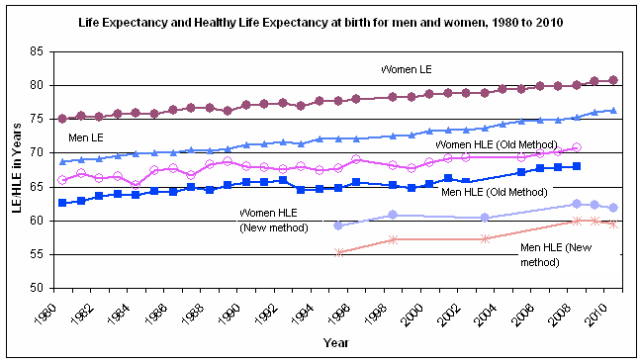 Whereas people were actually having a decade shaved off their life if their health was taken in account, the newer method of measure shaves closer to 20 years off and recently started getting worse. Put crudely: what’s the point of longer life if you can’t enjoy it? It may be simpler for the law and statisticians to think of people as dead or alive. But the whole point of life is to enjoy it; nobody from the government, through the media, on down to your local GP seems to be thinking in such terms.

Now, before this lapses into the classic, self-deprecating “we wiz aye shite” dirge, there is also much to celebrate. The problem is that the  cause now for celebration is geographically uneven, existing in just those areas that were not to the fore in creating those riches a hundred years ago and leaving West Central Scotland and Dundee behind.

That is the pivotal clue to the answer: the areas of Scotland exhibiting the worst symptoms were once world-beaters. After WW1, Britain behaved as if nothing had happened commercially and the heavy industry on which Scotland’s riches relied kept building riveted ships, steam engines and road rollers that would have made the Victorians proud. The desperate years of WW2 allowed this delusion to last until the fifties when it all came crashing down.

By this time, the Labour party had transformed from a party of idealism to one rooted in class warfare and thirled to the unions. And while their Stalinesque state interventions that gave us Linwood, Ravenscraig, Kinlochleven, Cockenzie and the like may have been well intentioned, all were backward-looking; all are now dust. Though Labour did see the errors of its statist ways and by embracing Blairism, achieved somewhat more 1997-2007 than the present Condems give them credit for, nonetheless, Alastair Campbell’s defence of this period in his blog still has to admit:

“Where (Professor Bogdanor) is critical of Labour is in relation to skills, especially at the bottom end of the social and economic scale, and not doing enough to cut regional inequalities”

Whether you agree that social intervention on behalf of the ‘vulnerable’ is a priority or not, the bottom line of Scotland’s 1970 failed attempt at state-directed affluence-for -all under Wilson and the intervening 40 years of ever-increasing benefits, social intervention and initiatives in deprived areas under sundry Labour councils has resulted in all of them remaining deprived areas. After disbursing public billions into deprived areas from Ferguslie Park to Mastrick not one area has transformed itself from a Dumbiedykes to Davidson’s Mains. Easterhouse or Wester Hailes, they each remain hope-and-ambition-killing sink estates that shame our pretence at affluence.

Every professional involved in such places now bemoans government cuts and argues for more resources. But—jointly and severally—they have failed. Simply throwing more money at these problems after 40+ years of doing just that is insane—and the definition of insanity is repeating an action in the belief that the outcome will change. In the last five years, Scotland has received over £600m in European ERDF and ESF monies, all of which went into ‘priority’ projects in ‘priority’ areas. The closest anyone has come to success was when ECC bulldozed Craigmillar flat and started from scratch.

The thousands of well intentioned people involved in this ‘sector’ will disagree with this but this is not about their personal or professional integrity. Ever since we invented a social work ‘sector’ there have been ever-increasing numbers earning a living from it. But whatever success there has been with individual cases, it is swamped by the societal context and riddled with failure. But putting people on methadone to stop them taking heroin is not just a backward step; it is the system defining a more convenient ‘solution’ because it is so manifestly incapable of addressing the problem.

The social basket case areas that keep our quarter-million workers in jobs were largely created by similarly well-intentioned people building those estates in the first place. Though much is made of housing quality, it’s not housing people need; it’s homes. People on £1m statement home estates suffer from isolation and social dislocation just as much as those in leaky GHA slums. Suicides are not unknown in either. Feeling valued as a contributing part of society is vital for anyone’s good quality of life. This is why people on Barra or Westray are bemused why people would want to live as most of us do—on a spectrum between manic middle class trying to keep up the payments and the chancer who skims the Giro money at the bookies and the pub before he takes what’s left home.

Look at the people of Barra or Westray—or Peebles or Cupar or Girvan. They don’t have an obesity epidemic any more than they deprive themselves of healthy living two decades before they actually die. Even the bampots there are valued for their unpredictability and taken home if they get in trouble. None of those communities—or thousands like them across Scotland—were laid out by planners, studied by sociologists, strung out on drug programmes or blessed by gobs of Eurodosh distributed by strangers. From organising beach cleans to doing their own hanging baskets to taking old Mrs McGlumpher down for her hospital check-up, they own their community and do what they can to improve it.

As long as anyone believes that their future lies with some pen-pushing jobsworth in a cluttered office in some faceless multistorey, they will lose that which is vital: a sense that their fate lies in their own hands. Every time we build another 500-house estate where everyone is around the same income, where there is minimal social interaction,  the seeds have been sown for another Castlemilk of the 2050s.

But if planning were to mix in small social and retail centres with parks and varied recreation and ensure that the shop assistant and the shop owner and her investment banker all lived in the same area, you’re starting to build a Barra or Westray, even if it’s just outside Cumbernauld. This is already achieved in big cities like Munich or San Francisco whose ‘neighbourhoods’ each exhibit distinctive characteristics and engender ownership of that community by those who live there. Kew or Canterbury work on that principle in England. Social problems exist but people ‘own’ their future, failing which family and community intervention means that the NHS (let alone social work) seldom need get involved.

Just because planning a balanced society is difficult is no excuse for hosing public money into each departmental silo that then sits tight with what it thinks it knows. Scots have come a long way in the last 20 years but large parts of the country languish because of the dead hand of patriarchal seventies thinking that institutionalises dependency and treats  quirky differentials among communities as inconvenience. But several major obstacles must first be overcome:

OK, so some of the above are neither practical nor is it clear how they could be made so. But, unless Scotland—independent or not—stops the present delusion that money is going to be anything but tight for the next decade and the only way we’re going to improve the lot of our citizens is to think radical and burn a few shibboleths, we will find ourselves engaged in unproductive squabbling over a diminishing pot while our people die from our own short-sighted stupidity.

Local ex-councillor, tour guide and database designer. Keen on wildlife, history, boats and music. Retired in 2017.
View all posts by davidsberry →
This entry was posted in Community and tagged health; social work; Scotland. Bookmark the permalink.