North Berwick High Street was a-buzz into the late evening yesterday. Although the Fringe-by-the-Sea beach hut had closed, the pavement tables were jammed and even Rory McIlroy was forced to the subterfuge of getting Bert’s personal number off the ESPN crew camped in Castle Inn before he could get himself a table at Zito’s. The crush was not helped by word texting around local ladies that Gerard Butler was already dining there.

Despite NB having been mobbed by crowds during this, the best summer we’ve had since 2005, there is a Brigadoonish boost when The Open is here. Arguably golf’s greatest contest this side of the pond, the influx of Mercedes with tinted glass and cloak-and-dagger codes taped inside their windscreens and tall, lost-looking bronzed men in white baseball caps and ill-considered tartan shorts gifts us a cosmopolitan sophistication that we just can’t match in the decade between the event happening here. 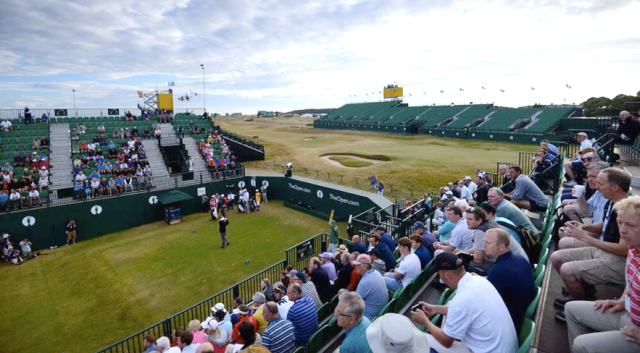 Muirfield Ready for the Open (copyright The Open)

Everything seems in place for the big day today; half the back roads in the North Neuk are sealed off, three trains an hour are whisking spectators direct to Drem where a fleet of two dozen Stagecoach buses drawn from all over Scotland take them to the course. It is never easy to access Muirfield, even if you’re just a local trying to walk your dog but Eliot Ness & The Untouchables would be 6 to 4 against being able to make it onto the course without credentials, let alone into the hallowed clubhouse itself.

Which is the nub of this blog. Now, I am as one with Mark Twain who regarded golf as a good walk spoiled; I am also as one with Groucho Marx who opined that he would not wish to belong to a club that would have him as a member. Whether the Honourable Company of Edinburgh Golfers would ever permit me to darken their clubhouse door at Muirfield is moot: the point is that, whatever reason they might advance to refusal, it would not be based on gender.

But the First Minister himself has already highlighted the antediluvian rule that, not only are females not permitted as members but the dastardly distaff are not even permitted in the clubhouse. Which is strange, not to say hypocritical, given that they (albeit grumblingly) have permitted female journalists in to perform an interview and they seem to have no problem paying waitresses minimum wage to serve them drinks.

The R&A is under some pressure to persuade the three remaining bastions of male supremacy that hold The Open to drag themselves out of a Middle Ages mindset and draw the logical conclusion of the 1928 Emancipation Act viz: that women have rights equal to men and it is not for some smug cabal of a membership committee to ignore progress on the rest of the planet simply because it is not technically illegal. Since half the membership is drawn from Edinburgh’s legal elite, you’d fancy they knew better and would want to be seen to get out of the bunker.

But the R&A’s form on this is poor. In April, they stated that they “would not bully clubs into accepting female members“. Yesterday R&A chief executive Peter Dawson said “it would take a hard push to change policy on all-male golf clubs. There’s a huge difference between men-only and whites-only club membership and we see no reason to act on Muirfield”. Whether he would be comfortable with men being banned from his local library or from joining a local tennis club, he did not say. But the bottom line is that the R&A is complicit in, if not actually supporting, the kind of discrimination that is illegal in all but private clubs.

Were this entirely a private matter, such a position might be legally, if not morally, tenable. But, having been involved in the massive public services effort that allows both Muirfield and the R&A to coin money like it was going out of style from such a high profile and public event where admission starts at £75 and drinks at a fiver, this travesty of the Equalities Act cannot be left to stand. Public money must not support any form of discrimination. In principle, ‘men-only’ or ‘whites-only’ are no different.

That the Open is a great event and welcome in East Lothian is not the issue. If a bunch of old farts want to live anachronistically, we should let them. But they don’t get to host any event that involves public money. And until the R&A stops turning a blind eye to such thrawn cantankerousness, their jaiket’s on a shoogly peg too.

My Response to the Continued Ban on Females by Muirfield

Local ex-councillor, tour guide and database designer. Keen on wildlife, history, boats and music. Retired in 2017.
View all posts by davidsberry →
This entry was posted in Community and tagged TheOpen; discrimination; equality. Bookmark the permalink.

1 Response to In The Bunker