Excavation of a previously unknown vault beneath the Douglas Tower of Tantallon Castle has revealed a lead-lined casket with several well preserved medieval parchments that seem to have been part of the family papers of the Red Douglas Earls whose stronghold it was until the 17th century.

The earliest, dating from the 1380s, is a faded cloth Pennon emblazoned with what appears to be the heraldry of Henry Percy, 1st Earl of Northumberland, wrapped inside a contemporary document, apparently signed by him and James, 2nd Earl Douglas. This must have been sometime in August 1388 when both were in the vicinity of Otterburn, the former being killed there and the latter captured in the battle of that name and also explains why the Bishop of Durham, who later advanced at the head of 10,000 men to chase the Scots back over the border, signed and kept this only copy. 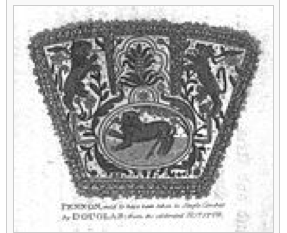 What the document reveals is that Douglas and Percy had actually negotiated a peace of sorts, in which Douglas received deeds (apparently transferred at the time, but since lost) to “Ye baronie of Eyelandshyre et parrishes appertayning hereto” in exchange for agreement “cesse & deysiste from warlyke congresse upon lands laying sutherlie thereto, naymlie ye estaytes of the sayd Earl Percé“. How the two subsequently fell out and met their fates at Otterburn, as history records, is not known.

Other documents found sealed in the hoard are fascinating as records from the era, such as a public notice from James II with the signature authority of Archibald, 4th Earl of Douglas prohibiting the “gowff” at “oor ferme toune o Nowrt Bayrwicke” but the Eyelandshyre (i.e. Islandshire) Grant is significant right to the present day because it was the contemporary name for Lindesfarne, the Farnes and local parishes that included Ancroft, Norham, Belford, Elwick, Kyloe and Tweedmouth.

Berwick had already changed hands a number of times before the hostile retaking it by the English after Halidon Hill in 1333 so that, when the Treaty ransoming David II back to Scotland for 100,000 merks was signed there in 1357 there followed a long period of technical English rule but actual joint administration while the English embroiled themselves in the Wars of the Roses and the trade with Europe via Berwick blossomed.

This culminated in Berwick being officially ceded back to Scotland in 1461 by Henry VI, in exchange for help against the Yorkists. Effectively, that meant that the English/Scots border, far from heading N from Great Cheviot, then running along the Tweed would have kept heading NE and included the the present towns of Wooler and Belford as the southernmost towns where the Scottish King’s writ ran on the East coast.

Of course, there was no such clear line as a border, nor niceties like border posts and passports in medieval times; kingdoms were delineated by the loyalty of local nobles and what they regarded as their domains. But the general area would have been administered as Berwickshire under military control from the castle at Berwick. The key role of Keeper of Berwick Castle was only given to trusted Scots nobles, the most prominent among whom was Robert Lauder of the Bass, a close friend and neighbour to the Red Douglases in Tantallon just across the water.

This state of affairs must have existed until the future and tragic Richard III came north to storm Berwick’s defences in 1483. Thereafter, the situation becomes muddy. Though the Tudors ploughed considerable money into modern defences (reportedly “£128,648, the most expensive undertaking of the Elizabethan period”) and made Berwick a ‘County Corporate’ changing its name from the now illogical “South Berwick” to “Berwick-Upon-Tweed, no mention is made of Islandshire.

The 1707 Treaty of Union defined Berwick as being under English Law but neither that, nor the 1885 Act that removed Berwick as a separate entity and joined it with Northumberland for election purposes, dealt with the islands and parishes further south. Because of the religious connections dating back to the days of St Cuthbert, these had been administered as an enclave of the County Palatinate of Durham. Why there is no record of Red Douglas protest or attempt to reassert their Islandshire domain post-1483 is not clear,  although they were struggling with the King at the time who saw them as too powerful (the 8th Earl Douglas had been murdered by James II at Stirling Castle in 1452).

But if this document were to prove still valid, it sets a variety of cats among the present oil-rich pigeons roosting in the North Sea. Instead of the present equidistant boundary drawn by Tony Blair to swallow up 6,000 square miles of previously Scots ownership into English territorial waters, this would more than reverse that and mean that virtually all oil rigs and over half the more southern gas rigs are in Scottish waters. It would also isolate Berwick in an artificial English enclave, totally surrounded by Scotland, much as the supposedly Russian Kaliningrad (ex-Königsberg) is two hundred miles from the rest of Russia and in limbo as a result.

But I’m sure we Scots can be nice about it, dig up the necessary benefits 25,000 Geordies (whom we see as honorary Scots) don’t get at present in England and welcome the reincorporation of the northern quarter of now-not-quite-so-North-umberland Heim ins Reich.