How Many Does It Take?

Posted on December 8, 2012 by davidsberry

Scotland has a proud history of making things. Our industrial revolution was built on a robust base of a very manly heavy industry that once supplied steel and locomotives and ships to a significant portion of the globe. The eighties boom of ‘Silicon Glen’ may now also be history but, even today, we are proportionally more engaged in making and exporting things than our English cousins, whether it be oil & gas equipment, whisky, Irn Bru or Tunnock’s Caramel Wafers.

But, like most Western economies, we have developed into a service economy, with more people earning a crust by hairdressing, sales or Macdonald’s. The extent to which this is true has been underscored by The American Lawyer. performing what it calls the Valuation Calculation, in which it estimates the market value of top law firms, as if they were regular companies. 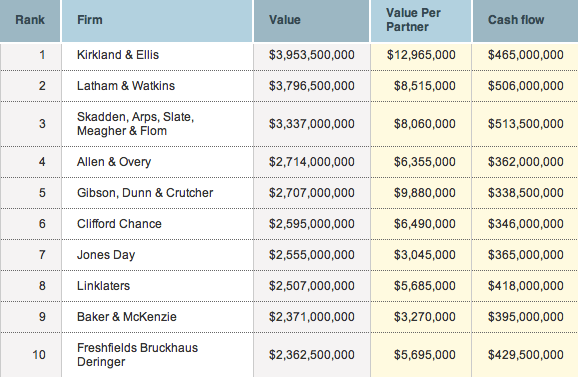 And that’s just the top ten. There are 100 global law firms with valuations over $250m. It’s not just on TV that law firms have been taking over the world. The famous US tendency to sue first and be reasonable later has led to a litigiousness spreading around the globe. According to Reuters, legal fees in the Gulf of Mexico oil spill are expected to run into nine figures—i.e. over $100,000,000.

If it were only such major actions that incurred such fees, then the costs would be buried in financial statements for large companies. But every time your bank writes to you about some change in conditions on your account or credit card; every time your insurance company adjusts your claim conditions, the letter always comes with a booklet of dozens of pages of tightly printed 6-point text that is not only illegible and incomprehensible but is invariably never read.

Such boilerplate, cover-your-ass sophistry was all created by lawyers, none of whom work for free or for you, even though you pay their (high) wages through bank charges, premiums, etc. And, because they spend a career knowing the rules and the exact square micron count each angel requires to dance on a 1 oz dressmaker sewing pin (not to mention where the bodies are buried in each deal), they have the inside track on promotion.

As a result, almost the entire 535 members of the US Congress are lawyers; according to Businessweek, 11% of the S&P 500 companies have CEOs who are lawyers—more than from any other background. Which goes a long way to explain why Western businesses have become so cautious and unimaginative and generally having rings run around them by Asian companies these days. Innovative Western companies are still led by mavericks—whether it’s Richard Branson at Virgin or Micheal O’Leary at Ryanair.

But, more importantly, their substantive-and-growing salaries (not to mention tomes that no-one reads) are all paid out of company funds, which leaves that much less for dividends or, more importantly, for investment. Coupled with bloated CEO salaries, lawyers’ fees are the biggest fiscal drag on business here in Scotland.

And, in case you think that’s their only source of income, Joe Public paid £153m to them in Legal Aid last year, with ex-MSP Gordon Jackson QC taking £407,000 of that personally. The 150 QC’s in Scotland receive fees of £500 per hour for their time, though they do nothing so vulgar as charge by the hour.

Picking on Scots lawyers is unfair because they’re no worse than elsewhere. But you have to ask what they are all for—other than their own self-serving preservation. When law firms vie with our largest companies in market valuation, do we not have our priorities about what matters seriously wrong?

No wonder the jokes continue (“What do you call 500 lawyers at the bottom of the sea? A start.“). My favourite is a variant on the ‘lightbulb’ joke: How many lawyers does it take to change a lightbulb?

Local ex-councillor, tour guide and database designer. Keen on wildlife, history, boats and music. Retired in 2017.
View all posts by davidsberry →
This entry was posted in Commerce and tagged lawyers; business overhead; Scotland. Bookmark the permalink.