Seldom have I seen so many politicos in a tizz, so many journos wrong-footed or so many people who should know better vacillating between doing the headless chicken and venting their spleen over the thumping victory “Gorgeous” George Galloway achieved in Bradford West. Unlike his rabbit-out-of-a-hat job at Bethnal Green in 2005 where he squeezed past a bemused (and rather undeservedly) dejected-looking Oona King by 500 votes, this was the real deal; here, he cleaned the floor with his opposition.

His opposition—quite apart from the usual 3-digit fringe parties—was actually the three major UK parties. George likened them to three buttocks on the same arse and certainly had skelped them all by the time the night was over. Their usual henchpersons were out explaining away why they had neither seen it coming nor had convincing explanations for what happened. What happened is as close to a landslide as elections ever get, viz:

While a cuffing for parties of Government and the low vote for minority/unheard-of parties were both on the cards, this was a Labour seat with a 5,000+ majority in the Labour heartlands of the ex-industrial North of England caused by nothing more sinister than the retirement of a sitting MP for reasons of ill-health. With the Coalition having their worst week so far and Labour’s new leader of six months itching to make his mark, this result ought to have been a foregone conclusion.

As close as the day before, Labour thought it was, reporting that Galloway was making a strong challenge but that Imran Hussein, a Muslim from the area, would be the winner. Indeed, it is almost unprecedented for the opposition party of the day to lose a by-election—as rare as three times in the last 40 years, including this one. And it wasn’t just Labour: the ConDem parties and just about everyone else but George and his troops had written this off as a Labour romp.

Since the result was announced, party spin machines have been in a lather of damage limitation with Harriet Harman most to the fore, declaring “we need to learn the lessons” on five occasions in 24 hours and “we need to deepen connection with voters” on three. If this smacks of Johann Lamont’s recent sackcloth and ashes script, it’s probably no coincidence; Labour—especially New Labour—is not geared to doing ‘humble and repentant’; it’s not in their DNA. Labour leadership is now suffering criticism that they were too focussed on maligning the Tories nationally even while campaigning in Bradford West—and there is much truth in this. 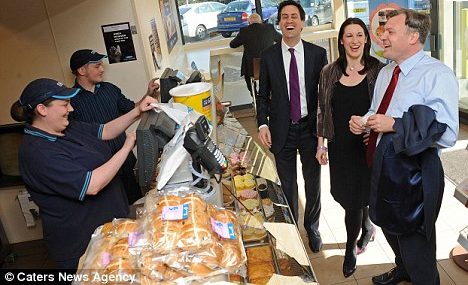 But Labour was still out there working the streets; they had a plausible candidate and a long history of steady support. What went wrong?

First of all, Bradford West is an unusual constituency. It is unusual in the same way that Bethnal Green is: the two have the largest percentages of Muslim voters in Britain. This played to George’s Respect Party’s strengths, which are anti-war and pro-Muslim. Many people may have forgotten the Iraq war, even if they have not forgotten Afghanistan. But, as Diane Abbott MP has pointed out, those who have not lie outside the political classes and provided an unrecognised undertow of opinion.

Secondly, there is George himself. It’s hard to name a British politician as flamboyant, as self-believing, as shamelessly self-promoting or—among politicos at least—less popular. No-one who is anyone likes him and many claim his 2010 squirmingly unpalatable Big Brother appearance contributed much to his win. This is simplistic. George is actually not only politically astute but clearly understood the people of Bradford West far better than any other candidate/party.

More than simply campaigning on an anti-war footing, he threw out conventional campaigning and addressed an unprecedentedly sectarian letter appealling to Muslims to search their hearts for they know ‘instinctively’ who is a Muslim and who is not. It is bracketed with the customary Muslim greeting as no previous party election literature.

It is as brazen and clever an appeal as anyone could come up with—and that is the third vital element in this. More than anything, it underscores just how vital speaking directly to local voters is. That involves not just bombarding them with literature and messages but working out what kind of community you are dealing with, what their concerns are and speaking to them in a language that resonates. That used to be the case for all parties. But in this day of central offices, large staffs and bright young things fresh from university, that seems to have been lost. With a weak local presence and scant hope of winning, such a mistake being made by the Tories or Lib-Dems is understandable. But that Labour should make it on a home patch is reprehensible.

The bottom line is that this massive victory was no fluke. It was caused by one—certainly flamboyant—candidate knowing how to speak to people while the ‘professionals’ gagged it, big-style. Wounded by his 2010 loss of Bethnal Green, written off after his risible showing on the Glasgow MSP list last year, Georgeous Gorge is back with a vengeance, stunning his old party and ca’ing the legs out from under Milliband’s leadership, just when he thought (rightly) he had the Tories on the run.

As even those marginally interested will know, watching the House of Commons is hardly comparable to watching the Bourne trilogy for entertaining action. Love him or hate him, now that GG’s back, that will change.