Fond as I am of Joni and her subtle creations, this blog has nothing to do with her soaring flexible voice or her poetic lyrics but is about the visit by a Sea King HAR3 to North Berwick this weekend.

With its endless coastline, growing shipping and recreational boating, as well as huge range of outdoor activities, Scotland has become something of a hotbed for emergency rescues. To their credit, the RAF and Royal Navy who both operate rescue helicopters in Scotland work closely with the Coastguard and RNLI to provide a superbly integrated team that, together with NHS A&Es, have saved more lives from the jaws of death than you could shake a stick at.

Such professional competence does not come easy and exercises that bring all elements together are a regular feature along our coast. This Sunday was the turn of North Berwick’s inshore Blue Peter III and its crews to get the shakedown. Instead of their standard Sunday exercise, three separate crews were out in the waters between the Craig and the Lamb practising winching patients from RIB to chopper and back while underway. Normally the local RNLI works with the choppers of ‘A’ Flight, 202 Squadron because their base is half an hour’s flight away.

202 Squadron’s origins started with the formation of No. 2 Squadron Royal Naval Air Service (RNAS) at Eastchurch on 17 October 1914. After operating various flying boats through two wars by 1976 it was operating Whirlwind helicopters and, with HQ 22 Squadron, formed the RAF’s Search & Rescue (SAR) Wing. The Whirlwind aircraft were replaced by Sea King HAR3s in 1978/9 and these aircraft then equipped both Squadrons. Since then, 202 Squadron has operated detached Flights, with ‘A’ at Boulmer (near Alnwick) and ‘D’ at Lossiemouth.

Each exercise is different so that crews can prepare for the unexpected. Yesterday’s called for an initial landing on the beach for a planning conference and am RNLI crew member to be lifted out and act as the ‘patient’ being transferred. As well as the RNLI RIB, a second RIB (EL Yacht Club’s rescue boat Valiant and skippered by Ted Hill) was used as a tender to ferry two more RNLI crews out to be rotated onto so that as many crew members as possible gained experience.

Launching Blue Peter III—at the Bottom of a Spring Tide

Blue Peter III (l) and Valiant (r) Waiting for the Off As you’ll have gathered from our Staycationer’s Shore Guide blog from just a few days back, we want everyone who visits our magnificent coast to enjoy themselves and stay out of trouble. But for those whose luck does not hold—and I say this for myself who has gone out on the sea umpteen times feeling all the better for this fact—there is a team of highly motivated (if not highly paid) professionals who are trained to pluck you to safety under the most dire conditions.

And should you come visit us here in North Berwick, stop in at the RNLI’s newly refurbished (courtesy of Kitty Wilkie and her team of volunteers) shop right opposite the shed in Victoria Road. Drop in to say ‘hi’ and buy a souvenir. If you saw them in action, you’d do both and reach deep as you did so. 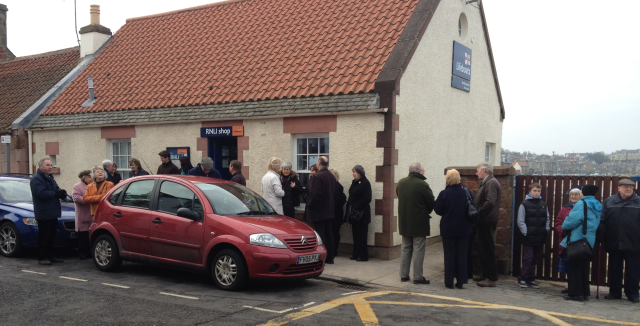 Local ex-councillor, tour guide and database designer. Keen on wildlife, history, boats and music. Retired in 2017.
View all posts by davidsberry →
This entry was posted in Community, Environment. Bookmark the permalink.