This season of remembering the sacrifices of previous generations in the defence of their country is no bad time to consider the state of forces currently defending these islands. We are constantly told how Scotland benefits on the world stage from being a part of the union and from being part of this larger entity called Britain. Oh really?

At first glance, that could be true. The UK spends almost £40bn each year on defence, the third biggest outlay on the planet (see the blog Hey Big Spender from June 8th this year) and a quick glance at the official RN deployment shows three ‘home’ flotillas (Devonport, Portsmouth and Faslane) with over a dozen ships assigned to each. It’s only when you dig down to the real deployment that you realise this is pure fiction.

One of the regular taunts that Unionists deploy to question an independent Scotland’s viability is how such a small country could defend vulnerable and scattered oil and gas infrastructure that are needed to finance its future. Fair question. Let’s look at what happens now. Such are the UK’s global pretensions that, of 19 remaining destroyers and frigates, almost none are operational in home waters.

The three older Type 42 and three newer Type 45 destroyers are primarily air defence platforms—little use defending an oil rig from terrorist attack. The RN’s workhorses are its 13 frigates, scattered across the seven seas—on drug-running patrol in the Caribbean, international exercises (like Taurus 09 that took a dozen ships to the Far East for months) or squaring up to Somali pirates in the Indian Ocean.

In theory, a single warship is maintained at high-readiness in UK waters, called the Fleet Ready Escort (FRE). But this is often deployed for counter-narcotics or training operations as far away as the Mediterranean. The last ship to fill the FRE role was HMS Portland, which left FRE to join NATO exercise Joint Warrior off the coast of Scotland in early October. It has yet to be replaced.

All we Scots have protecting our home waters are nuclear submarines, useless in defending oil platforms and a flotilla of minehunters too underarmed/slow for the job. All are based at Faslane—as far away from the rigs as possible. Tip into the equation that our only long-range maritime patrol squadron, ideally based at RAF Kinloss, was scrapped and we have £400bn worth of oil reserves effectively undefended.

“Ah”, you may say, “who’s going to attack oil rigs in middle of the North Sea…and why?” Well…Somali pirates have shown there’s no limit to what small, fast lightly armed boats can capture. Determined Yemeni terrorists with an even smaller boat packed with explosives showed how to take out big warships like the USS Cole.

The UK is not a world power, nor has it been for decades. If the English hanker to re-live the glories of empire, that is their prerogative. And, as long as we’re party to their persistent over-stretch into bottomless wasps’ nests like Afghanistan, we must expect outraged locals to attempt reprisals, such as the Glasgow airport car bomb, at us too. For we Scots will be blamed equally. Our airports, our bridges and vulnerable priceless infrastructure like gas pipelines, power stations, oil rigs and refineries are as much targets as the World Trade Centre or HM Dockyard, Portsmouth.

The financially, if not morally, bankrupt UK is no longer capable of sustaining both its foreign ambitions and its own defence. Its naval defence posture of no aircraft carriers to cover their multiple foreign commitments, combined with massive but unusable nuclear strike capacity as home defence, is irresponsible, verging on the insane.

If Scotland were independent, a proportionate defence budget would be under £3bn. But even a third of that spent on naval forces would allow at least three frigates (running costs ~ £25m per annum) plus a flotilla of Finnish Hamina-class fast missile boats (£20m new), backing up a squadron of medium-range maritime reconnaissance aircraft (twin-engined CN-235 Persuaders at £15m each). With an effective force like that, you could even contract to other countries to give them a better defence posture than they could manage themselves—including England.

When Britannia waives the rules on sensible defence, maybe it’s time Scotland fended for itself before some evil organisation works out that current British defence of the North Sea is an MoD sham, largely based on smoke, mirrors and wishful thinking. 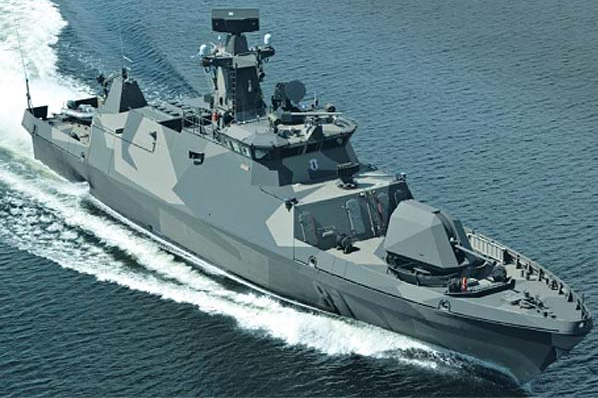 Hamina Class: 250 tons, 30kts stealth fast patrol boat. The RN has nothing like it

2 Responses to Britannia Waives the Rules