It should surprise no-one that the other shoe has finally dropped: all private bidders to build the Borders Rail have now dropped out and a second hot potato passed back to government agencies to complete. Transport Minister Keith Brown MSP, pressured by the opposition to assure them that it would be built by 2014 and for the £295m quoted, said “Yes”. Borders politicians of all stripes gushed enthusiasm at this reasurance.

But this gives the Minister a chance to re-cast the whole project because the Lab-Dems cheese-pared the whole thing into a questionable shadow of its original self, divorced from Network Rail and the rest of Scotland’s rail system. Consider the details:

In fact, such a glorified tram hardly merits being classed as a railway—having more in common with the Aviemore funicular, which is no great business precedent to follow. If we have to put £295m into this, why not put it on a basis that could lead to further development? While the business case demonstrates benefits to Galashiels, thinking bigger about Midlothian and the Central Borders could make this project far more beneficial to those areas, as well as fitting into Edinburgh City Region transport.

Ever since 1969’s closure prompted the stillborn Border Union Railway, there have been enthusiasts to revive the Waverley route, some the entire way to Carlisle. But the now-electrified Carstairs route makes Waverley’s gradients & curves uncompetitive. It was regarded as the most uncomfortable main line ride around, with even expresses scheduled over 2 hours end-to-end. Total reinstatement may one day be possible as a enthusiast-based ‘nostalgia’ line, (c.f. the highly scenic Settle-Carlisle line). But, commercially, it’s a non-starter. 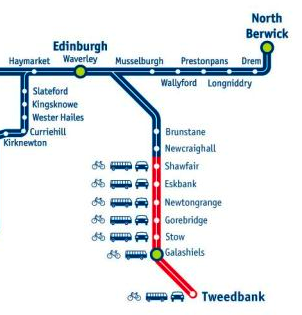 What is essential is to put the Borders firmly back on Scotland’s railway map and leave the door open for further expansion. But there are still major obstructions, including:

As of now, the last two are for Network Rail to address, but the first is the dealbreaker. Whether done in conjunction with Transport Scotland’s long-overdue rebuild of the Sheriffhall roundabout (along the lines of the Newbridge) or not, the grade crossing must take the road over (or under) the rail: a ‘tram-type’ flyover, such as TIE built at Saughton and Edinburgh Park, would limit the line to light rail and stifle expansion.

If such a ‘proper’ grade crossing is not already part of costs, temporary termination of the line at Gorebridge as a “Phase I” would compensate. This would still serve higher density traffic and prove itself commercially if ScotRail extends its Newcraighall service to cover this first stretch. “Phase II” could then extend the line to Tweedbank, as originally planned, with a further “Phase III” extension to Melrose and SBC HQ at St Boswells. If this last were provided with Park & Ride, major housing development here would relieve development pressure on Edinburgh and, as a Central Borders ‘hub’ be a better terminus. Extensions to Kelso and/or Hawick might then be considered.

But, first, a neglected option of the existing Gilmerton freight line could be added to this ‘network’ to serve western Midlothian. Although only single-track, it both exists and crosses the A720 and could serve stations at Loanhead, Roslin and Glencorse. This would again be part of the ScotRail network franchise and further relieve the road traffic to/from Midlothian.

Rather than well meaning anoraks dreaming of a re-opened Waverley line (while being sold another tram), Midlothian and the Central Borders deserve a ‘real’ railway to link them into the booming Edinburgh economy of the next century.

Local ex-councillor, tour guide and database designer. Keen on wildlife, history, boats and music. Retired in 2017.
View all posts by davidsberry →
This entry was posted in Transport and tagged Borders; rail; Waverley. Bookmark the permalink.