Another Load of Old Balls

Given that oratory was never his strength, Shadow Chancellor Ed Balls’s speech to the Labour Conference faithful in Liverpool was a competent affair that achieved what most senior opposition spokespeople aspire to but seldom achieve—landing a couple of blows on the government.

Coming from a protégé of the now untraceable Irn Broon and seen from a Liverpool or even a Lambeth perspective, it balanced fairly frank nostra culpas about some policy gaffes with claims that ‘it wisnae us’ that ran the UK fiscal bandwagon off the rails in 2008. But, as Sheila Lawlor points out “Labour’s bequest to the country and the coalition was a bare cupboard, stuffed with IOUs piling up.”

In fact, some of Ed’s claims look pretty hollow when held up to detailed scrutiny—much in the style of his old boss. As one example, he claims that the public sector has suffered devastating job losses but fails to mention that the private sector has, in fact, created two jobs for every one lost in the public sector. 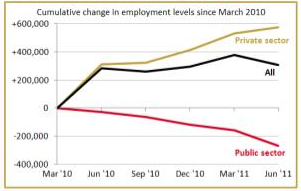 In defence of Labour’s fiscal prudence, he claims they did well, given that they inherited the worst public debt ever in 1997 and proceeded to improve it—if not a blatant lie then a gross misrepresentation of the truth. 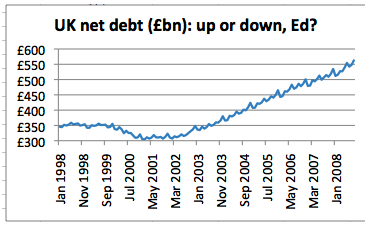 Now, given his stint at the Treasury as Irn Broon’s right-hand man, it’s hard for Ed to dodge responsibility for, let alone claim ignorance of, such gross misrepresentations. But, given that he himself admits involvement in the infamous ‘light touch’ regulation of the financial markets in general and the FSA in particular, Ed shows especially rare cheek in stating that it was not too many nurses/police/firemen that caused Lehman to collapse, and thence the global crisis.

Well no, Ed, it wasn’t…it was buddying up to the likes of Fred the Shred and their unregulated cowboys of the City and New York, packaging up worthless mortgages as ‘financial instruments’ that brought US and UK banks to their knees. Had anyone paid proper attention to how the Germans or Swedes or Norwegians kept greed on a short leash, our banks might not have cratered (as theirs did not) and our budget might not now be £200bn+ in the hole as a result of your (not Osborne’s) gross negligence.

And, while we’re discussing gross negligence, perhaps you could shed light on the Chancellor’s insistence—in the teeth of Treasury advice—that some 400 tons of gold bullion was sold between 1999 and 2002. This turned out to be the bottom of the market. Like your raid on the pension funds, it was inept and showed no judgement as regards timing. The £4.5bn you netted was squandered in political giveaways. But just think what effect a £24bn injection—what that amount of gold is now worth today—could have had in greasing our creaking economy.

The question for us in Scotland is: what does Ed’s 5-stage plan offer? More capital spend (source unclear) & less tax income, combining to simultaneously worsen both deficit and borrowing. That makes even less fiscal sense than Osborne’s brutal Plan ‘A’. But Lanarkshire has something Liverpool lacks: Scotland’s own option: Swinney’s more subtle Plan MacB that finds extra capital and works with business and local government to stimulate the economy.

Looking at Ed’s track record at the Treasury and picking through his 3,834-word conference speech, as above, the real answer is not hard to find: this is the usual ambitious unionist with eyes fixed on Westminster, peddling us Scots another load of old balls.

Local ex-councillor, tour guide and database designer. Keen on wildlife, history, boats and music. Retired in 2017.
View all posts by davidsberry →
This entry was posted in Politics and tagged Labour; budget; Ed Balls. Bookmark the permalink.