Nothing New Under the Sun

Young whippersnappers with no memories of the sixties may think that ‘new’ politics—in which politicians live from spin and from answering any question but the one asked—derive from the Blair government and from hidden spin doctors like Alastair Campbell, forever blackberrying spokespeople into being eternally ‘on-message’.

Such whippersnappers are also unlikely to have heard of Hunter S. Thompson, subject of Terry Gilliam’s misguided 1998 stab at capturing his eccentricities in Fear & Loathing in Las Vegas and of Alex Gibney’s penetrating 2008 documentary Gonzo: the Life & Times of Dr Hunter S. Thompson. He provided the model for the ever-outrageous “Duke” in Gary Trudeau’s internationally syndicated cartoon saga Doonesbury. But he knew a thing or two about politics and what drove the people who chose to be in it.

Eleven US Presidential campaigns before this one, Thompson wrote an excoriating, insightful piece on the then-Presidential-hopeful, Richard Nixon. This was pre-Vietnam and pre-Watergate. But Thompson’s style of ‘gonzo’ journalism got to the heart of Nixon and demonstrated that—in politics, as with so much else in human endeavour—there is nothing new under the sun. The excerpts below are from the July 1968 issue of Pageant (pp. 6 – 16). (Pageant was an up-market version of People that went out of business)

“No interview with Richard Nixon will end until he refers to himself, at least once, as a “political man.” His opponents, by implication, are mere “politicians.” Especially the man Nixon plans to defeat this November. . . for the Presidency of the United States.

“So it was with a sense of morbid curiosity that I went to New England not long ago to check on “the real Richard Nixon.” Not necessarily the “new Nixon,” or even the newest model of the old “new Nixon,” who is known to the press corps that follows him as “Nixon Mark IV.” My assignment was to find the man behind all these masks, or maybe to find that there was no mask at all — that Richard Milhous Nixon, at age 55, was neither more nor less than what he appeared to be — a plastic man in a plastic bag, surrounded by hired wizards so cautious as to seem almost plastic themselves. . . These political handlers were chosen this time for their coolness and skill for only one job: to see that Richard Nixon is the next President of the United States.

“The major polls and surveys in the country suggest that Nixon may be right, despite the outraged howls of all those voters who insist that a choice between Nixon and Johnson is no choice at all. Sen. Eugene McCarthy has called it “a choice between obscenity and vulgarity.” Yet McCarthy is the political heir of Adlai Stevenson, who said that “People get the kind of government they deserve.” If this is true, then 1968 is probably the year in which the great American chicken will come home to roost. . . either for good or for ill.

Richard Nixon has never been one of my favorite people, anyway. For years I’ve regarded his very existence as a monument to all the rancid genes and broken chromosomes that corrupt the possibilities of the American Dream; he was a foul caricature of himself, a man with no soul, no inner convictions, with the integrity of a hyena and the style of a poison toad. The Nixon I remembered was absolutely humorless; I couldn’t imagine him laughing at anything except maybe a paraplegic who wanted to vote Democratic but couldn’t quite reach the lever on the voting machine.

“After 1960, though, I no longer took him seriously. Two years later he blew his bid for the governorship of California and made it overwhelmingly clear that he no longer took himself seriously — at least not as a politician. He made a national ass of himself by blaming his defeats on the “biased press.” He called a press conference and snarled into the microphone: “You won’t have Dick Nixon to kick around anymore, because, gentlemen, this is my final press conference.”

There is no avoiding the fact that Richard Nixon would not be running for President in 1968 if John Kennedy hadn’t been assassinated five years earlier. . . and if the GOP hadn’t nominated Barry Goldwater in 1964. . . which guaranteed the election of Lyndon Johnson, who has since done nearly everything wrong and botched the job so that now even Nixon looks good beside him.

“The situation is so obvious that Nixon, “the political man,” can’t resist it. And who can blame him for taking his luck where he finds it? He’s back on the “fast track” that he likes to talk about, with the Presidency to gain and nothing at all to lose. He’s obviously enjoying this campaign. It’s a bonus, a free shot, his last chance to stand eyeball to eyeball again with the high rollers.

“Even before the votes were counted in New Hampshire, GOP strategists said Nixon had already gathered more than 600 of the 667 votes he would need to win the nomination. There is no denying his fine understanding of the American political process. I went to New Hampshire expecting to find a braying ass, and I came away convinced that Richard Nixon has one of the best minds in politics. He understands problems very quickly; you can almost hear his brain working when he’s faced with a difficult question. He concentrates so visibly that it looks like he’s posing, and his answer, when it flows, will nearly always be right, for the situation — because Nixon’s mind is programmed, from long experience, to cope with difficult situations. The fact that he often distorts the question — and then either answers it dishonestly or uses it to change the subject — is usually lost in the rhetoric.

“The “new Nixon” is a very careful man when it comes to publicity; he smiles constantly for the cameras, talks always in friendly platitudes, and turns the other cheek to any sign of hostility. His press relations are “just fine,” he says, and if anyone mentions that “final press conference” he held in 1962, Nixon just smiles and changes the subject. He is making a conscious effort to avoid antagonizing reporters this time, but he is still very leery of them. His staffers sometimes join reporters in the bar, but never Nixon. He neither drinks nor smokes, they say, and bars make him nervous. Humphrey Bogart would have taken a dim view of Nixon. It was Bogart who said, “You can’t trust a man who doesn’t drink.” And it was Raoul Duke who said, “I’d never buy a used car from Nixon unless he was drunk.”” 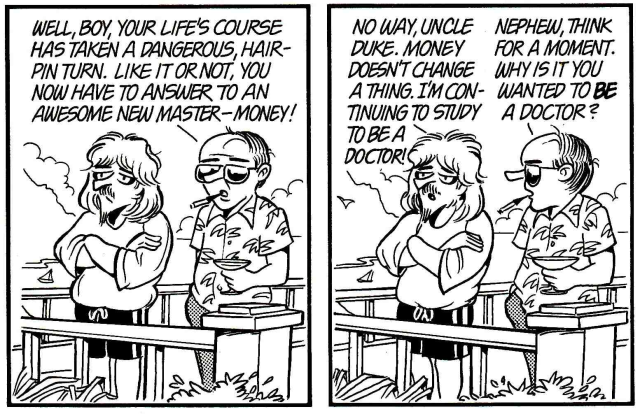 Local ex-councillor, tour guide and database designer. Keen on wildlife, history, boats and music. Retired in 2017.
View all posts by davidsberry →
This entry was posted in Politics and tagged spin doctor; US politics. Bookmark the permalink.