As a amateur observer of things economic, it’s hard to feel bad when you’re proved right but I derive no pleasure in having predicted the present fiscal tumble in which stock markets have lost 10% in value and the mighty US of A sees its debt rating drop from top rank AAA to (beginnings-of-a-slippery-slope?) AA+. That this size-nineteen-clodhopper of another shoe dropped surprised few in the business but it is totally unprecedented. It is a maxim in US fiscal circles that the government does not default. Standard & Poor has broken ranks to say “they might”

This shoe dropping will raise pain on everybody’s corns because it pushes up interest rates (mortgages, credit cards, etc) even as the value of investments and pensions erodes. The Republican US Majority Leader might have taken off his Dick Turpin mask at the last minute but those in the know seem unconvinced that enough political resolve to cut spending and limit the US debt exists. That, in turn, takes the wind out of the economy’s sails so that the present weak recovery becomes threatened.

All this would be bad enough were it not for the simultaneous fiscal war going on around the Euro in which poor generalship is leading the Eurozone towards defeat. We banged on about this last month but, with the PIGS (Portugal, Italy, Greece & Spain) all looking ropier in their ability to repay the debt they’ve each taken on, the sheer size of the total makes any bale-out like last month’s extension of Greek debt impossibly large.

Britain—and, by extension, Scotland—may not be directly involved in ether. But such is the global scale of both problems that either deteriorating from here would mean recession; both together would amount to another depression. To give you some idea of the scale of all this, MPs of all parties have been handwringing about the £160bn of debt we landed ourselves (talk of our grandchildren paying it off is no exaggeration: the National Debt from WWI took until the nineties to pay off).

Once, in the heady days of the Clinton administration, talk was of a US budget surplus. But, check out how puny Britain’s debt is in comparison with what Bush doctrines and tax cuts for the rich have done to the US: 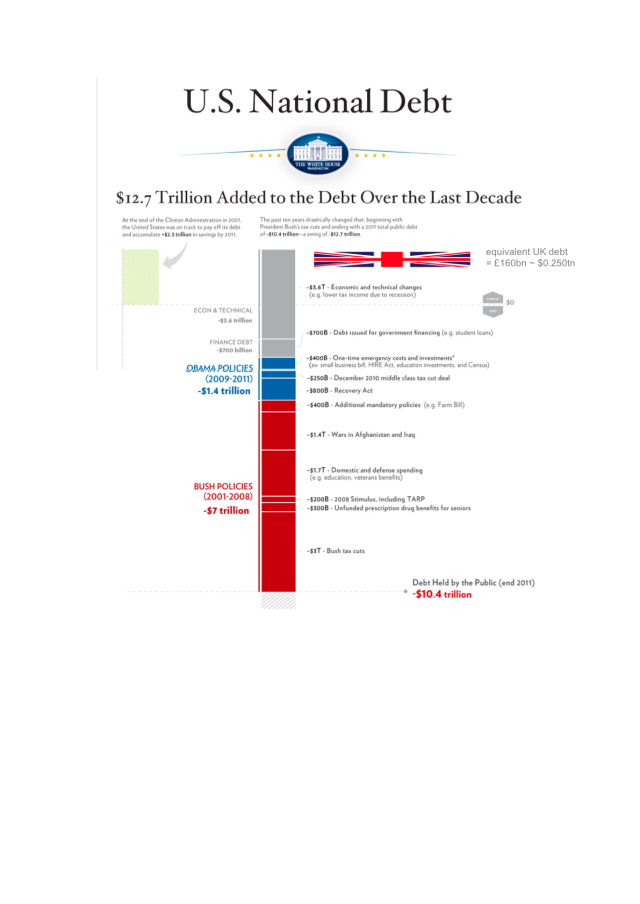 Local ex-councillor, tour guide and database designer. Keen on wildlife, history, boats and music. Retired in 2017.
View all posts by davidsberry →
This entry was posted in Commerce, Politics and tagged debt; default; recession. Bookmark the permalink.