I have taken some flak down the years for having been a regular reader of the Economist. But far from being another tub-thumping, jingoistic right-wing rag à la Torygraph, it has always provided me with a more balanced international perspective than governments manage. This week, it raises some serious questions regarding tourism and how effective countries are, both at making a success of it and at fleecing the maximum amounts from those who do visit—not necessarily the same thing.

According to VisitBritain “the UK ranks 5th out of 50 in the world in terms of a ‘Tourism’ brand.  Our strongest ‘Tourism’ dimensions relate to being ‘rich in historic buildings and monuments’ and for our ‘vibrant city life and urban attractions’, in each case ranked 4th in the world.” Certainly all parts of the UK have advanced considerably from the greasy cafe/dingy pub image of half a century ago, but are we matching peoples’ ever-higher expectations, especially those of visitors from abroad?

This evening I attended a team talk at our local Seabird Centre after three trips as a guide on their Bass Rock trips today. In two hours, nobody mentioned foreign visitors or their languages. In my three trips, I had had over 75% foreigners: Poles; Germans; Dutch; Israeli; Malaysian. Nobody mentioned customer relations, let alone language, training. It may be unfair to criticise a successful visitor attraction for this because very few other visitor-oriented establishments from First ScotRail to the council’s putting green staff seem to understand that they are in the front line of visitor experience.

Britain—and especially Scotland—may have scenery, history and monuments to die for but we still seem content to let them sell themselves. Leave aside that parking wardens ticket clueless visitors with glee, we actually miss a huge trick in persuading those visitors who do come to part with their hard-earned dosh. People having a good time normally do this with gusto but consider these spend statistics from the Economist: 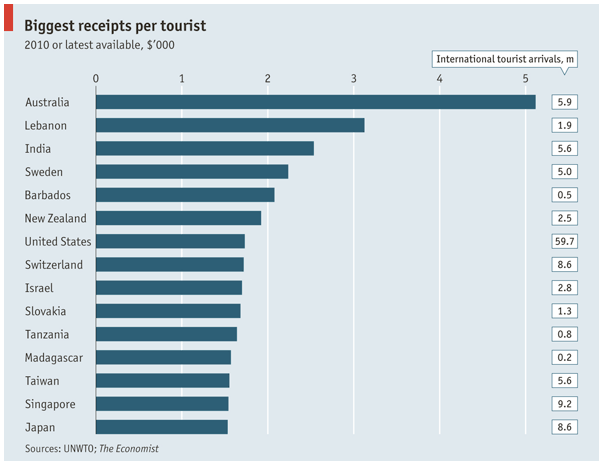 Receipts per Tourist in US$ by Country

Even allowing that many of those countries are distant and therefore receive longer visits per visitor, this hardly applies to Sweden or Switzerland. The figure for Britain in $935 per head from 29.6m overseas visitors in 2010. Scotland did marginally better with $1,017 per head from our 2.3m visitors. But look at those stats. It means that Scotland attracted proportionally fewer foreign visitors than England did. AND we did much worse than Slovakia at persuading them that this was THE place to spend their money.

It’s all about service, about understanding, anticipating and—especially—fulfilling visitor needs. Most of our better restaurants ‘get’ it. But too many third-rate places staffed by gormless, obviously untrained teenagers will greet hungry customers with “we stopped serving lunch at Two” when it’s 2:10pm. Edinburgh is Britain’s ‘second-top tourist destination’. Yet, stand in Waverley’s teeming concourse and show me where you get information on local buses, let alone buy a joint city transport ticket that is standard elsewhere. And good luck finding & dragging your suitcases up to Tourist Information.

Despite it being Scotland’s No 1 business, we are simply not yet professional enough  to succeed in 21st century tourism. And that requires more than getting past assuming everyone should speak English. It’s about the decorum of dealing with Muslim women; that Germans like their tea weaker and coffee stronger than we do; that Americans like being spoken to by locals for no good reason; that the surname comes first in Chinese names. So, go out there and adopt a tourist; do your bit; don’t gripe if they block the pavement or don’t understand queues.

These people have had the good taste to visit and appreciate why we all like living here.

Local ex-councillor, tour guide and database designer. Keen on wildlife, history, boats and music. Retired in 2017.
View all posts by davidsberry →
This entry was posted in Commerce, Education and tagged tourism; international visitors. Bookmark the permalink.